The launch of Sky Glass is the biggest product launch by Sky, the parent of Sky News, since it was bought by the US broadband and entertainment giant Comcast nearly three years ago in the face of competition from Disney and Rupert Murdoch’s 21st Century Fox.

All of those were, as Sky’s chief executive Dana Strong noted today, services people didn’t actually know they wanted – until they had them.

All of them changed the way television is consumed.

The launch, which Comcast’s chairman and chief executive, Brian Roberts, has described as offensive rather than defensive, has to be seen in the context of wider developments across the telecoms and media industries.

Some will see it as an attempt by Sky to confront head-on providers of streaming services, such as Netflix, which have for some time been cutting deals with TV manufacturers to make their services more prominent, for example by having a specific button on the remote control.

But there is more to it than that.

For a start, the new product will do away with the need for people receiving Sky TV to do so with a satellite dish and a set-top box.

That immediately opens up a market of some 3 million households in the UK alone who are currently unable to do so because a satellite dish cannot be attached to the building in which they live.

Selling the new Sky-enabled TV sets will also make it cheaper to get the service into the homes of customers than by installing satellite dishes and set-top boxes.

The move also opens up new markets across Europe for Sky to target.

The company has previously launched streaming services with mixed success in Europe.

For example, it launched Sky Espana in Spain in 2017, only to close it in September last year.

Selling TV sets fully integrated with Sky’s services should in theory make it easier to compete with the plethora of streaming services out there.

The key point, though, is that this move is in line with the strategic direction in which Sky has been moving in recent years – which is to be an “aggregator” of services.

Sky has successfully struck deals with providers of streaming services like Netflix, Disney+, Amazon Prime Video and Discovery+ to get them onto the Sky Q platform.

The arrangement removes confusion for customers by enabling them to access all of these services and apps through a single Sky subscription – effectively making it a one-stop shop.

This is all the more important given the way streaming providers are becoming more and more reluctant to share their content with others.

Disney+, which shares none of its movies with other streaming platforms, has been particularly strident in this regard.

Yet the launch is not without risk.

It will take Sky into open competition for the first time with TV manufacturers such as LG and Samsung.

Mr Roberts responded: “I look less at trying to displace those companies and more bring together what Sky can do.

“We’re going to be able to licence our technology all over the world, we’re pleased to have Foxtel [Australia’s leading pay-TV provider] joining and it’s a journey we’re on.

“It’s more than the actual physical television – that’s what’s so great about the product.

“The physical television is maybe the smartest in the world – but it is what is behind it that makes that claim so true, and that we can do with others over time as well.”

The move will also see Sky competing head to head with Amazon, which recently announced plans to launch its own range of Amazon-branded TV sets, as opposed to simply selling Fire TV devices that plug into third-party TVs.

The other point of interest about this launch is what it says about the strategic direction of the wider Comcast group.

A big debate has been raging within the media and telecoms industries for years about marrying content with distribution.

For example, investors in BT have long questioned its ownership of BT Sport, which is now for sale.

And earlier this year, the US telecoms giant AT&T unwound its own gigantic bet in this field by announcing it was spinning off its entertainment division Warner Media, which is merging with Discovery.

Some investors have argued that Comcast’s shares would enjoy a higher rating from the stock market if it were to spin off its own entertainment assets and focus on being a pure distribution business.

Mr Roberts has resisted those calls and Sky Glass, in the way it integrates hardware, software and content, represents an intensification of that strategy.

He said: “Each company has a different strategy so I can’t speak to them, but our DNA – my dad founded Comcast – was about making television better, back in Tupelo, Mississippi in 1963 and that’s what we have been doing – from two or three channels of television to what you get today, with literally infinite choices.

“AT&T started in a different place and so the culture and the fit can be different in different companies.”

If Sky Glass proves to be successful, industry analysts expect something similar to be rolled out in the United States, where Comcast is the biggest broadband provider with more than 34 million household and business customers.

The Wall Street Journal reported earlier this year that the company has been looking into selling its own branded TV sets, offering a choice of different streaming apps, similar to the choice Sky Glass will be offering European consumers.

Comcast is already selling its own streaming boxes in the US, called XiOne, which is comparable to Roku and which has been viewed by investors simply as a way of getting the Peacock service out to more potential customers.

But it is more likely the company is thinking, longer term, of powering streaming services per se – and not just its own.

Sky is the parent company of Sky News. Sky News operates under an independent editorial policy as part of undertakings detailed in our Editorial Guidelines. These are publicly available here. 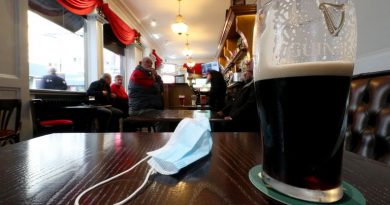