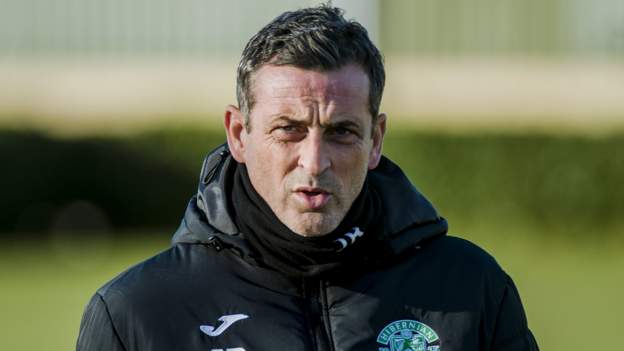 Hibernian head coach Jack Ross is disappointed that the SPFL has “no appetite” to listen to “common sense” concerns over a packed fixture list in December.

Hibs and Celtic will each play nine matches next month after League Cup final weekend fixtures were rearranged for the following midweek.

Remarking on “peculiar governance”, Ross explained: “When I mentioned it, they just chucked in another game. I don’t know what would happen if I asked them again.”

He added: “I think it was a fairly common-sense thing to say, not just for me but Celtic as well, because I know they have got an equally busy schedule with their European involvement.

“Allied to that, (Livingston manager) David Martindale has spoken publicly about it and another manager has privately said to me about the number of games they have got. So there is a knock-on effect around the league.

“And it’s not just about complaining and moaning, there is scientific support to say that the number of games some of the clubs are being asked to play in such a short period of time is not great.”

Hibs had two league matches postponed last month due to a Covid-19 outbreak at the club, with a rearranged visit to Ross County coming on Wednesday.

And he thinks approaching the league, even as a collective, would be pointless.

“I just don’t think it would make any difference,” he said. “We have peculiar governance in that respect where there are times they want to flex their muscles and be really strong and yet there are countless things that happen where there is a lack of appetite to get involved in, which puzzles me at times.

“There seems to be no appetite to take on board the opinion of people who work within the game.”

Ross also said he was “baffled” by the decision to allocate Hibs 17,500 tickets for the 19 December final with Celtic.

“Naturally you want as many of your own supporters in the stadium for a cup final, and also historically we have taken massive crowds to cup finals in recent times,” he continued.

“The counter-argument to that is the semi-final attendance [Hibs had around 10,000 at the semi-final win over Rangers]. I find that a really strange thing to take into account because the League Cup has never been one that attracted big crowds in semi-finals.

“It’s baffling that we do not get that opportunity to take that allocation and Hampden never looks like a difficult stadium to segregate. I find it quite astonishing but it’s about using it as a positive to galvanise us.”