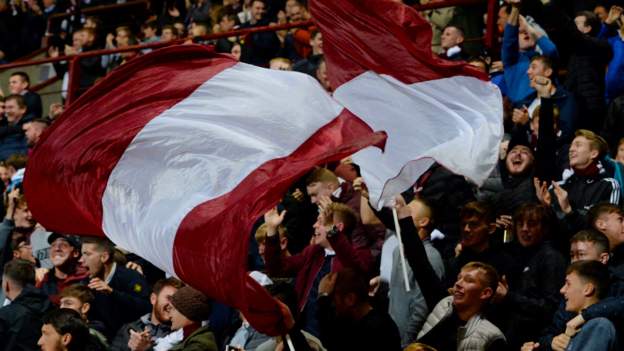 Hearts and Motherwell fans must show proof of double vaccination on Saturday at Tynecastle despite the Scottish government’s “grace period” over enforcing the certification scheme.

From Friday, over 18s will be subject to vaccine passport spot checks to attend games with crowds above 10,000.

The system will not be enforced by Scottish government until 18 October.

But Hearts sought clarification and say they are “still required to implement the new protocols” on Saturday.

The club said: “Unfortunately, any person failing to prove their vaccine certification or exemption status will, in compliance with the law, be refused entry.”

Fans at two other Scottish Premiership matches this weekend – Aberdeen v Celtic and Rangers v Hibernian on Sunday – will also have to show they have had both doses of the vaccine.

Hearts have urged fans who are exempt to provide proof.

The club’s statement added: “Hearts would like to emphasise that we are obliged to follow Scottish Government legislation and we thank supporters for their understanding and cooperation.”