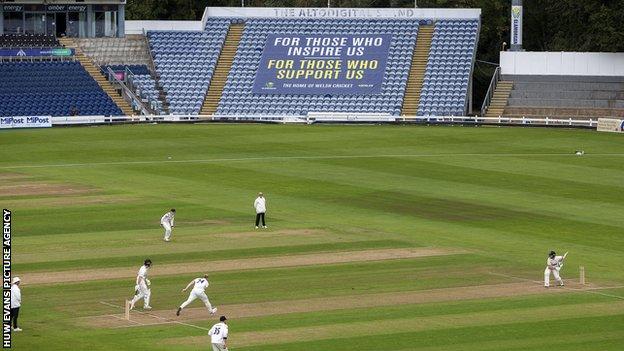 
Glamorgan will again play all their home games in Cardiff in 2021 because of coronavirus-related logistical issues.

The county staged matches in Colwyn Bay, Swansea and Newport in 2019 before the pandemic.

Their T20 Blast South group games will be played between June 10 and July 18, earlier than previous years.

The One-Day Cup group runs from 22 July to 12 August, alongside Welsh Fire games in the new Hundred tournament.

After facing just five other counties behind closed doors in the truncated 2020 season, Glamorgan will play all the first-class sides in 2021 in at least one format, with the exception of Worcestershire and Durham.

They will host Gloucestershire on Thursday 10 June in their T20 opener, while Warwickshire visit Sophia Gardens for the first 50-overs match on Thursday 22 July.

All their away fixtures will also be staged on main county grounds, with the exception of a Middlesex venue to be confirmed.

“It’s a shame, we really enjoy our annual trips to St Helen’s, Colwyn Bay and Newport but putting Covid guidelines in place at out-grounds for spectators and players, it’s a real challenge financially as well as operationally, so we took the pragmatic view along with our partners to play all our first eleven fixtures this year at Sophia Gardens,” said chief executive Hugh Morris.

He hopes to take games away from the capital in 2022 if the public health situation is back to normal.

“The board is committed to trying to take first-class professional cricket around the country, we’ve done so for a very long time, but this year we’re best served by hosting all our games in Cardiff,” Morris told BBC Sport Wales.

“We want to try to grow the game in all four corners of Wales, so yes, in 2022, hopefully all things being equal, that’s something we would like to do.”

“I am optimistic. It’s really encouraging to see the roll-out of the vaccine programme, hopefully they (the vaccines) are going to work their magic and allow us to welcome crowds back into Sophia Gardens.”

Relatively small crowds would normally be expected for Championship matches in April and May, with attendances based on the county’s diehard members.

But Glamorgan would hope to draw in substantial crowds by the time of the T20 in June, together with England T20 fixtures against Sri Lanka on 23 and 24 June, and an England-Pakistan one-day game on 8 July – which has already sold more than 10 thousand tickets.

“Like most businesses in the UK, they (finances) are precarious. We were hit very hard last year, we lost just over half our revenues,” Morris admitted.

“We’re very heavily reliant on having major crowds at Sophia Gardens to watch international cricket, our domestic games and the new Hundred competition.

“But we’ve worked really hard to welcome back fans as and when they’re able to be back.”

Glamorgan are putting in place plans for a multi-camera enhanced streaming service, as they did in 2020, in case the season does start behind closed doors.

The County Championship schedule has already been announced, with Glamorgan starting their campaign away to Yorkshire on Thursday 8 April as the first of seven consecutive four-day games.

Glamorgan are waiting for Australia to announce their programme to learn the likely availability of Marnus Labuschagne and Michael Neser, but hope South African batsman Colin Ingram will be in Wales at the start of the season.

There are no definite fixtures after 12 August, with the knock-out stages of the T20 Blast and the One-Day Cup, as well as the last four Championship games, all depending on earlier results.

It's A Sin: The woman who inspired Russell T Davies' Aids drama

Stalking: ‘I’m a victim but feel like an inconvenience’