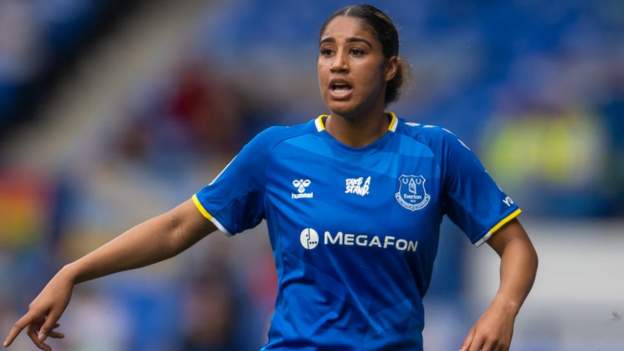 Everton defender Gabby George was forced to miss 12 months of football and watched on as her side played at Wembley in an FA Cup final – but now she’s back and loving the game more than ever.

George, 24, made a return after 377 days out, having ruptured an anterior cruciate ligament in February 2020.

The England centre-back has now started every Women’s Super League game for Everton this season and is feeling “refreshed” from a year’s absence.

“Sitting in the stands and watching everyone do what you love was difficult,” George told BBC Sport.

“Having that year out to get myself focused and fully fit was vital for my career, I think. Being back on the grass felt crazy and it didn’t feel normal to me.

“I love doing it, so every time I step out on the training pitch, I enjoy every second. It feels refreshing for me. It taught me to love the game again.

“It’s been my life since I was nine so not having it for a whole year was difficult. Every time I do get to play it’s a great day.”

George said hearing the news of her ACL injury “felt like the worst day in the world”. She waited four months for surgery because of the effect coronavirus restraints was having on the NHS.

But advice from players who had experienced the same helped her through it.

“I saw they had all come back and it made it easier for me,” she added.

“Most of them reached out to me. I spoke to Steph Houghton and Lucy Bronze, for example, and they’re two of the best players in the world. If they could recover, then there was no reason why I couldn’t.”

‘I’ve always been a winner’

George’s love for football developed as a kid, playing alongside her cousin, Manchester United and England’s Jesse Lingard.

“I was close to Jesse growing up. He supports me a lot now. He’s one member of the family who understands it on a different level,” said George.

“Being a professional footballer is sometimes difficult for people to understand – what it takes to be one. People think being a footballer is the best job in the world, which nobody is denying, but obviously there are ups and downs.

“There are times that are harder than others. Having someone there I can turn to, who understands what it’s like, makes it easier for me.”

George made her Everton debut aged just 17 in 2014 and three years later she became the club’s first female professional footballer.

A lot has changed since then, with the club investing heavily in the transfer market and on facilities at Walton Hall Park.

“When I first came in, we were training late at night and I had college the next morning,” said George.

“We used to train on Astroturf but now we have access to all the pitches at Finch Farm [Everton’s training centre], the gym, meals at the training centre and our own Walton Hall Park. It’s changed incredibly over the past few years.”

Everton were rewarded for their investment initially, reaching the 2019-20 FA Cup final at Wembley, eventually losing to Manchester City in extra time.

George was forced to miss the game through injury but says the club has “aspirations to go on and do bigger things”.

“I’ve always been a winner since I was a young girl. Everton have always had aspirations to be successful,” she added.

“In the past, it’s been quite up and down. We all know Rome wasn’t built in a day and we’re going to have to work hard and train hard to get to where we want to be. The club has everything to go out there and do it.”

‘No point in setting limitations’

Everton hoped to challenge for a Champions League qualification spot at the start of the season but after nine games, they have picked up just three wins and sit ninth in the table.

Former manager Willie Kirk was sacked in October and replaced by Frenchman Jean-Luc Vasseur – a treble winner with Lyon.

“Obviously we set our targets high at the start of the season but we had a difficult start and it wasn’t how we wanted,” said George.

“Now we need to concentrate on winning every game we can and see where it leaves us. I don’t think there’s any point in setting limitations. We want to win every game we play.”

It is the first time George has worked under a foreign manager and she says he has “worked with winners” in the past – something Everton needed.

“We’ve taken little steps but now I think it’s time to take a big step and try to challenge the top three,” she added.

George, who has two England caps but has not featured for the senior team since 2018, hopes that by performing consistently for Everton, she can earn a recall in the future.

“Any player loves to play international football. If the call comes I’ll be over the moon with it. I just need to get back playing consistently for my club and do well.”