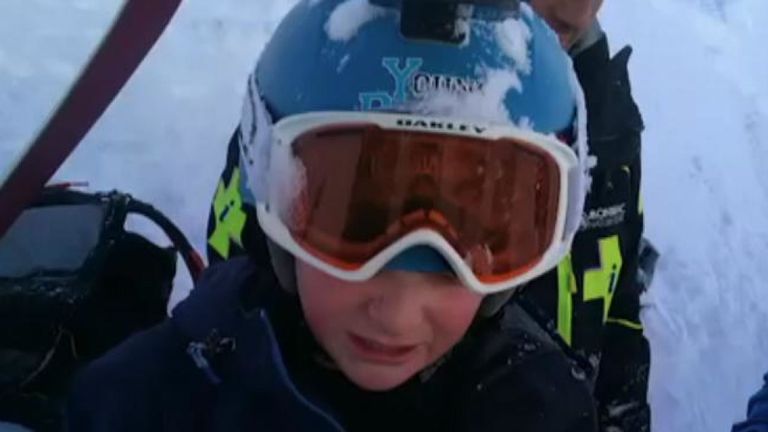 An 11-year-old British boy who was buried under heaps of snow for 30 minutes thanked his father through frozen tears as he was rescued.

Footage of the dramatic incident in the Chamonix region of the French Alps, at the base of Mont Blanc, showed young Fox Campbell being buried near a piste – a path in the snow marked for skiing.

The La Chamoniarde rescue team said Fox was “very lucky” to survive the ordeal, having been pulled from the snow half an hour after he went under.

The footage posted on the La Chamoniarde Facebook page was recorded by a camera on Fox’s helmet, and showed him plummeting down a hole between two pistes before being covered by snow.

Fox, who is a member of the Freeriders Mountain Ski Club, had tried to hurdle over the gap – and can be heard struggling and shouting for his dad Gillon after falling down.

His father had fallen behind after waiting for Fox’s younger brother to catch up.

After losing sight of Fox, Mr Campbell and his other son caught up with his wife expecting him to be with her.

He said: “I thought my son was in front with her, but he wasn’t. So we went up the lift, but he still wasn’t there.

“And so I decided that I should just ski back the way I came and figure out where he was. I skied back down into the gully and I was going along and something was different. The snow was different, it was crumblier on the ground.”

Eventually Fox was found thanks to a GPS tracking device he was carrying, which was part of his safety equipment along with a backpack and shovel.

It caused Mr Campbell’s transceiver to start beeping, telling him “someone was in the snow really close by”, and he shouted for help before rescuers arrived on the scene.

The video posted by La Chamoniarde shows them digging desperately to find Fox, before his blue helmet comes into view and he is pulled to safety by his father.

Mr Campbell said: “I won’t forget the moment I got to hold him. He was so cold. But he was alive.”

One of the rescuers in the video said Fox had been under the show “for about 30 minutes” and that the chance of surviving such an ordeal was “usually small”.

The video is now being used in a bid to help other skiers stay safe on the slopes.

“Beware of a false sense of security when skiing close to the piste,” says the caption, which adds that skiing off-piste comes with dangers including “avalanches, icy or hard snow, rocky outcrops, cliffs and holes”.

“There are no signs to find your bearings, and no one to alert the ski-patrol. Fox was very lucky.”

It adds: “Transceiver, probe and shovel are essential but do not prevent an avalanche.

“To ski off-piste, you need to know more than just how to ski!

“You must be aware of the dangers, that way you know how to avoid them.”

Coronavirus: Calls to protect great apes from threat of infection