Kalidou Koulibaly, 28, is ready to leave Napoli in the summer, with Manchester United being linked with the Senegalese centre-back. (Mirror)

Barcelona are willing to sell French forward Antoine Griezmann, 29, for 100m euros this summer – just a year after signing him from Atletico Madrid for 120m euros. (Sport)

Arsenal have been in discussions with medical staff from other Premier League clubs on whether their players should return to training this week. (Mail)

‘Premier League could resume before end of outbreak’

Barcelona are in discussions with their top players over a wage reduction as the club does not foresee being able to cover their wage budget for the rest of the season, which exceeds 1bn euros. (Marca)

Juventus striker Gonzalo Higuain, 32, broke quarantine rules in Italy to be with his cancer-stricken mother in his native Argentina. (Sun)

The father of Real Madrid’s Luka Jovic has said the Serbian striker, 22, must accept any punishment – even jail – if he’s guilty of breaking quarantine rules to visit his girlfriend in Belgrade. (Marca)

Former Arsenal and Barcelona midfielder Alexander Hleb says “no one cares” about the coronavirus in his native Belarus, the last country still playing top-flight football. (Sun)

West Ham will face stiff opposition from UK Athletics over using London Stadium for matches if the Premier League season goes beyond the end of June. (Times – subscription required) 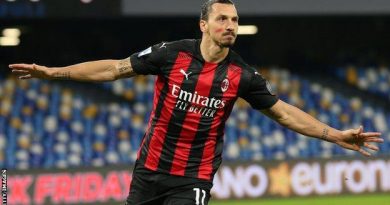