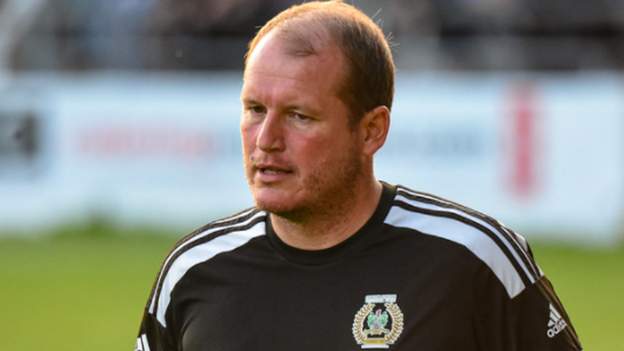 If you, or someone you know, have been affected by any issues raised in this article, support and information is available at BBC Action Line.

Steve Cunningham knew deep down he should not have been anywhere near the away dressing room at Glossop North End.

Two days earlier his wife, Caroline, had given birth to their stillborn daughter.

For an hour, the couple held their precious baby girl, took photographs of her wrapped in a blanket and told her how much they loved her before she was taken away.

Cunningham turned to his role as a football manager to help him deal with the emotionally traumatic experience.

Having kissed his daughter goodbye on the Thursday, he was delivering a team talk on the Saturday to his players at Lancashire non-league club Colne before a match at Glossop in the ninth tier of English football.

“I was trying to carry on as though nothing had happened,” Cunningham, now manager of Curzon Ashton, tells BBC Sport.

As his Curzon team prepare for an FA Cup third qualifying round tie at home to Cleethorpes Town on Saturday, Cunningham, 41, talks about how the harrowing experience prompted him to raise awareness around men’s mental health.

“I’m certainly no counsellor or specialist,” he says. “If by telling my story it helps make just 1% difference to somebody’s life, I’d rather help.”

‘I used football as my release’

Cunningham describes the loss of his daughter on 20 February 2014 as the lowest moment of his life.

“We’d had lots of issues previously with miscarriages,” he says. “Because they were all at the early stage, I never let it get to me.

“This was different. Seeing your baby like that and not being able to do anything to help her, it hit me like a ton of bricks.”

A stillbirth is when a baby is born dead after 24 completed weeks of pregnancy. It happens in around one in every 200 births in England.

If the baby dies before 24 completed weeks, it is known as a miscarriage or late foetal loss.

With his emotions “all over the place”, Cunningham was eager to throw himself into a busy routine.

“I used football as my release,” he says.

“I remember being in the away changing room at Glossop trying to do a team talk and it just hit me.

“The players were treading on egg shells. They didn’t know what to say. But I needed football at that moment.

“My wife was distraught and heartbroken and had her mum and dad with her. I thought ‘what good would it do, me sat there and both of us crying?’.

“I didn’t want to be wallowing. I wanted to get out and be around people. When I think back, I was trying to block it all out.”

‘I left the meeting in tears’

Cunningham says he was “horrible” to be around as he bottled up his emotions while struggling with bereavement.

In August 2019, his perspective on life changed for the better.

Having managed Colne since 2013, where he had four different spells as a player, he was invited to give a talk to a local support group that helps men with mental health issues.

“I went to talk about being a football manager, being a family man, and coping mechanisms when it comes to dealing with stress,” he says.

The Men’s Den Colne offers a safe space for men to talk about their feelings.

“I didn’t fully understand what I was letting myself in for,” adds Cunningham, who also talked to the group about the loss of his daughter.

“It showed me there are lots of people hurting behind closed doors. Each chap was given a few minutes to talk about their week – the good, the bad and what was on their mind.

“Their stories left me in tears but it changed my whole perception and understanding of what mental health issues actually are.”

There is not a day that passes when Cunningham does not think about the loss of his daughter, but he no longer hides his feelings and has learned to open up.

“She is very much in our thoughts and in our hearts,” he says.

‘You are not alone’

Since their loss, Cunningham and his wife have welcomed Maizie, six, to the family, who is little sister to 10-year-old Zak, who plays at Burnley’s academy.

During lockdown in April 2020, the Curzon boss shared a ‘guess the celebration’ video on YouTube featuring Zak and Maizie, with the three acting out famous goal celebrations in their back garden.

Behind the video is a serious message about men’s mental health.

Cunningham, in charge of National League North Curzon Ashton since June 2020, says: “Being someone who has experienced the loss of a daughter, somebody who has experienced redundancy, tried to deliver money to my family which brings its own stresses….a lot of people depend on you and sometimes you don’t get it quite right.

“There are too many men who have too much pride to come out and say they need help.

“If anyone is feeling down please speak to someone. Spread the word – you are not alone.”

If you, or someone you know, have been affected by any issues raised in this article, support and information is available at BBC Action Line. 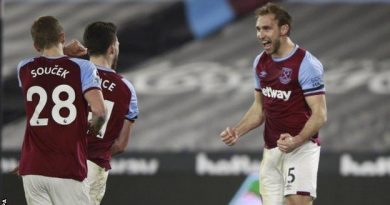 West Ham: Craig Dawson to join Hammers permanently at the end of the season