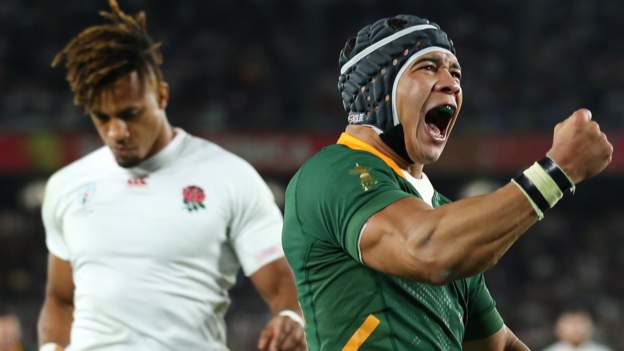 Pieter-Steph du Toit says he was confident of victory in the last Rugby World Cup final after the first 10 minutes.

In that opening spell in Yokohama two years ago, England’s Owen Farrell chose to spin the ball wide from behind his own posts and team-mate Billy Vunipola, facing a fast-advancing South Africa defence, chucked a pass to ground deep in his own 22.

“I just thought: ‘Are you guys crazy? This a World Cup final, you don’t play like this,'” Springbok Du Toit reflected last year.

This weekend is the rematch – but a repeat is out the question.

Du Toit, Farrell and Vunipola will all be missing, either through injury or lack of form.

With minds focused on France 2023, their teams have changed, too.

Both have been through reinvention. Some forced on the coaches, some forced through by them.

Jones gets personal with his personnel

The 32-12 defeat by the Springboks in Japan didn’t initially prompt coach Eddie Jones to shake up his England team.

For the first match of the 2020 Six Nations, he tweaked just three names in the starting XV. It would have been fewer, but for injury.

But, a fifth-placed finish in this year’s Six Nations, the worst for a generation, has hastened evolution into revolution.

Marcus Smith, 22, and Freddie Steward, 20, now fill the key positions of fly-half and full-back. Billy and Mako Vunipola, long mainstays of the pack, have been discarded. Cruiserweight number eights Alex Dombrandt and Sam Simmonds have been given a chance. The team’s leadership group has been rejigged with Ellis Genge, Tom Curry and Courtney Lawes ushered centre stage.

The refresh is partly down to human nature. Jones believes complacency had seeped into his squad. He feared the weight of experience was now slowing up his team, rather than adding to its heft.

He felt some players psychologically had passed their ‘best before’ dates.

Jones, chasing the world title that has so far eluded him as an international head coach, has opted to twist, rather than stick, as he attempts to land the big pot in 2023.

South Africa have instead kept the faith.

Captain Siya Kolisi is part of a 30-plus clutch including Eben Etzebeth, Willie le Roux and Duane Vermeulen in Saturday’s starting line-up.

Familiar faces Faf de Klerk, Frans Malherbe and Cheslin Kolbe, like Du Toit, would be involved but for injury.

Prop Ox Nche, with eight caps, is the least experienced member of the Springbok matchday squad, but has upheld his team’s set-piece stranglehold in his short Test career.

The fabled front row of Malcolm Marx, Steven Kitshoff and Vincent Koch lurk on the bench ready to sway the game in the second half, just as they did in Japan.

Those judgements on whether appetite remains in established stars are always subjective. What isn’t is the game has shifted.

Law tweaks mean defences are now under more pressure. Referees are demanding quick ball from the breakdown, eating into teams’ time to reorganise against running threats in front of them.

Previously, running the ball was often seen as too dangerous. The rewards were outweighed by the risks, especially in your own half. Jones would frequently cite a statistic that the teams who kick most, win most.

But the tune has changed.

“The way you go forward, between kicking and between running, has balanced out a little bit,” he said in October.

“You can run more than the opposition to win. Where the game is has become a little less clear.”

South Africa’s autumn wins over Wales and Scotland, like their summer series victory over the Lions, have come via brutal basics rather than a sudden switch to champagne rugby.

But October’s victory over the All Blacks showed a greater taste for adventure, including a sublime round-the-back pass from Lukhanyo Am to set up one of two tries.

The teams’ last meeting at Twickenham was a dreary affair. Heavy-artillery kicking, rather than fleet feet, decided it with England sneaking a 12-11 success.

This time has the potential at least to be different in style.

South Africa rode to the World Cup on a swell of emotion.

Coach Rassie Erasmus’ team talk before the final against England – demanding his players put aside their egos and realise the effect a collective triumph would have back home – went viral.

It was the final climatic chapter in a redemption story. A team, ranked seventh in the world a year before, inspired to scale the heights against the odds.

This time around though, the tale comes with more sting.

Three days out from the match, Erasmus, now South Africa’s director of rugby, was banned from the Springbok matchday staff for a year.

It was punishment for a made-for-social-media dismantling of referee Nic Berry’s performance during the summer’s British and Irish Lions series.

The 49-year-old’s media strategy has always come with a sense of pantomime. After the defeat at Twickenham in 2018, he memorably staged a practice session in front of the cameras ‘coaching’ his players to tackle at neck height.

It was a clumsy jibe at England fly-half Farrell escaping punishment for a suspect hit in the closing stages of that defeat.

But his 62-minute video nasty on Berry played to fewer laughs.

The rancour from it permeated the rest of the Lions series. World Rugby’s investigation has run for months. And Wednesday’s damning verdict, which described his offences as “especially serious and egregious”, is unlikely to draw a line under the affair.

For some Springboks fans it is the latest example of the way the game’s authorities are set against the side, coming two days after their stars were overlooked in World Rugby’s Player of the Year shortlist.

There will be England fans who feel it is an overdue serving of just deserts.

Erasmus, who has dished out more words than water as a touchline bottle-runner in recent Springbok matches, won’t be roaming the Twickenham pitch.

But, like in Yokohama, he has set the tone once again. 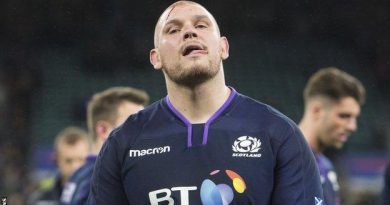 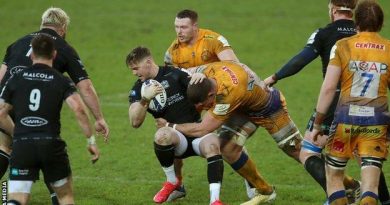 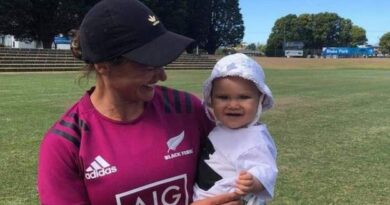