Defender Harry Maguire and right-back Trent-Alexander Arnold are out injured.

England travel to Andorra on Saturday, 9 October and host Hungary on Tuesday, 12 October.

Centre-back Tomori, who moved from Chelsea to AC Milan in the summer, last played for England in November 2019 when he earned his only international cap.

Manchester United’s Maguire has a calf injury and Liverpool full-back Alexander-Arnold has a groin issue.

Aston Villa striker Watkins makes his return for the first time since being cut from Southgate’s provisional Euro 2020 squad in the summer.

Arsenal goalkeeper Ramsdale was part of the side that reached the final of that tournament after being drafted in following an injury to Dean Henderson but is still waiting to earn his first England cap. 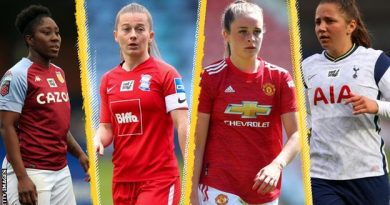 Women’s Super League: Where do clubs stand after season end?