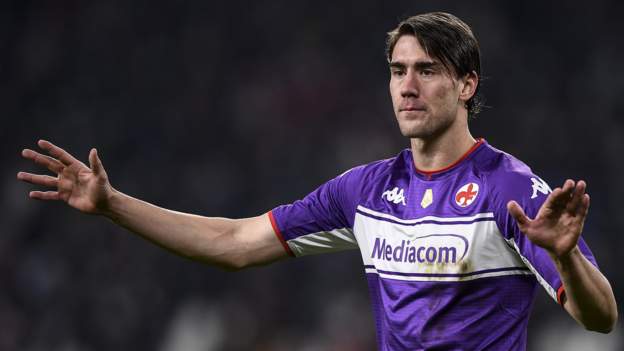 Barely a day goes by without the Fiorentina striker being linked with a move to the Premier League or another high-profile destination by the English media.

One morning he’s on his way to Manchester City, the next he’s Tottenham’s chosen replacement for Harry Kane. Paris St-Germain have even reportedly considered adding him to their already stacked forward line.

One thing we do know is that a move is coming, with the player refusing to extend a deal that runs out in the summer of 2023.

So who is Vlahovic and why do half of the clubs in Europe want to sign him?

Born in Belgrade, flourishing in Florence

Let’s start with the basics and a bit of history. Vlahovic is a 21-year-old Serb striker, born in Belgrade, where he began his professional career with one of the country’s foremost clubs, Partizan.

He became their youngest player when he made his debut for them against OFK Beograd on 27 February 2016 at the age of 16 years and 24 days.

He would subsequently become their youngest scorer, taking the title from Luka Jovic – now of Real Madrid – when he netted in a 3-2 win over Radnik Surdulica on 2 April.

Rumours of a move to England began back then, but a deal with Serie A side Fiorentina was struck instead, with the forward, then only 18, making the switch to Italy for the 2018-19 season.

Much was expected of him, despite his age, but he would play just a handful of goalless senior games in that first season, starting one Serie A match. He was a regular presence in 2019-20, but his return of six goals in 30 appearances saw some quickly look to write off a player still learning on the job.

The 2020-21 campaign, though, was when he made his mark, fuelled by the faith of Cesare Prandelli, who returned to the club as manager in November 2020 but lasted only until March before resigning.

After one goal in his first 10 league games, Vlahovic exploded into life in late December with an attention-grabbing scoring spree that has yet to ease up.

Since 16 December 2020, he has scored 28 times in 39 league appearances. He is the youngest player to score more than 20 league goals for the Viola in a single season since that tousle-haired titan of Serie A in the 1990s and early 2000s, Gabriel Batistuta.

In 2021, only two players in Europe’s top five leagues – the prolific Bundesliga-based duo of Erling Braut Haaland and Robert Lewandowski – have scored more than Vlahovic’s total of 25.

And of those to have netted 20 times in the calendar year to date, Vlahovic is only one of three aged under 25, along with Haaland and Kylian Mbappe, both also much sought after.

Vlahovic has continued to excel, but it was clear that Prandelli’s departure from Fiorentina was a blow. After a hat-trick against Benevento in March, the striker spoke of the former Italy manager’s impact on his burgeoning career.

“I owe him everything,” he said. “The coach has given me space and confidence in a moment that was complicated for me.

“In the post lockdown, he arrived two hours early for training. He made me understand what it means to be a champion on and off the pitch. He’s gigantic everywhere.” 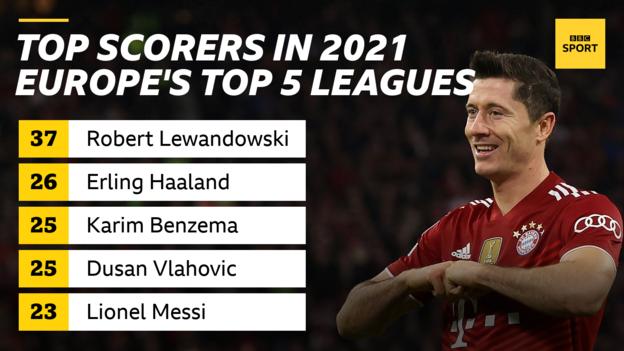 Strong in the air, skilful on the ground

Prandelli leaves behind a giant asset in Vlahovic.

At 1.9m tall and stocky, the Serb is possessing of a stature and physical ability to shield the ball, making him a handful for any defender.

This season, he has been fouled more than any other Serie A player, with only three forwards winning more aerial duels. Only Sampdoria’s Morten Thorsby was involved in more aerial contests than Vlahovic’s 267 last season.

He is not lightning fast but quick enough to pose problems and a willing runner, with a fine touch, intelligent positional sense and awareness of others.

Watching back his goals from last season and this, one is struck by the Lewandowski-esque ability to find a crucial yard on a marker or ghost into space almost unnoticed in the box before a lethal finish.

“He moves a lot but he is a striker who shows a lot of presence in the penalty area,” Italian football writer Daniele Verri told BBC Sport. “He can push defenders out of the way, hold up the ball and he can pull two defenders along with him and still score.

“And he is very young. He has nowhere near yet touched his full potential.”

Perhaps his most impressive quality is one rarely found in a player so young and which will serve him well if he moves to an elite club.

“He has been under pressure from fans, who have been booing him, and the club itself since it emerged that he would not extend his contract,” continued Verri. “But he is still scoring goals. He is responding on the pitch.

“That, to me, shows a mental strength you need to be a top professional player.”

The Serb still has plenty to work on to truly reach that elite level, though.

While he has outscored his expected goals total – the tally he should have, judged by analysis of the quality of his chances – since the start of last season, his shooting accuracy is still below many of the game’s best line-leading forwards, at just under 38%.

He will also need to improve his technical and tactical awareness to truly shine at a top team.

Fortunately for him, he has plenty of time on his side and, seemingly, an array of attractive options in front of him.

It has become clear that Vlahovic’s future does not lie in Florence.

His current deal runs until the end of the 2022-23 season, but Fiorentina owner Rocco Commisso revealed in a statement in October that the forward would not be extending it, despite an offer that would have made him the highest-paid player in the club’s history.

With the prospect looming of a valuable asset leaving for nothing, the likeliest solution will be a sale next summer or sooner. But to where?

He has been linked with Liverpool as Roberto Firmino’s long-term successor and was touted as a potential replacement for Kane at Tottenham this summer, but would perhaps not suit the kind of deep-moving false nine role that those two currently perform.

Spurs’ new Italian boss Antonio Conte saw Vlahovic first hand during his time at Inter Milan last season and may view the Serb as the perfect number nine to offer more of a spearhead to his attack.

Having failed to sign Kane in the summer, Manchester City have been operating without a recognised striker for much of this season, and Vlahovic would surely be in the mix along with Haaland if Pep Guardiola decides to change tack.

Then there are Arsenal, Atletico Madrid, PSG, Real Madrid and a host of other clubs reportedly monitoring the situation.

The worst-case scenario for Fiorentina is Vlahovic joining fierce Serie A rivals Juventus, which has been reported as possible in the coming January transfer window.

Down the years, Juve have prized a number of star players away from the Viola, including Roberto Baggio, Giorgio Chiellini, Federico Bernardeschi and, last summer, Federico Chiesa, stoking the flames of resentment in the Fiore faithful.

“If the right offer arrives in January it is possible, but Fiorentina are doing quite well this season,” added Verri.

“If they are close to the Champions League places come January, they may say to Vlahovic: ‘Stop talking, score goals and come June we can sit down and find a solution.’

“But if it is not Juventus now, Fiorentina will find a buyer for Vlahovic next summer, no problem.”

Transfer deadline day: Can you remember these signings of past years?