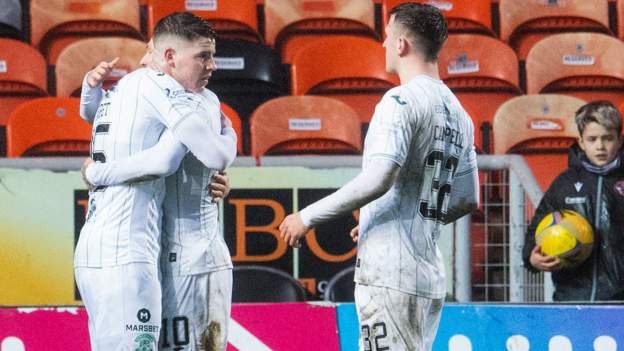 Kevin Nisbet made Hibs’ dominance pay before the break and Chris Cadden added their second after United went down to 10 men following Charlie Mulgrew’s injury in the second half.

Declan Glass scored a wonderful solo goal to cut the deficit late on but Jamie Murphy sealed Hibs’ win with the last kick of the game.

That ensured United slipped to a fifth straight defeat and they are now out of the league’s top six, while Hibs go into the winter break in fifth, two points clear of Aberdeen after a good start under Maloney.

“I couldn’t have asked the players for a better start,” the Hibs boss said. “Some of these players have had two sessions, some of them have had four so they can take real credit from the last couple of games.”

The first half went exactly to plan for the new Hibs boss as they enjoyed 75% of possession while restricting United to zero shots on target.

Nisbet’s opener was fully deserved when it came, although controversial, and there was a delay in his strike being awarded as referee Willie Collum consulted with his linesman about a potential offside.

Replays did appear to show Nisbet was in front of United’s second-last man, with only Mulgrew left on the line behind goalkeeper Benjamin Siegrist as Martin Boyle struck the shot which his team-mate turned home.

Hibs took the luck their play merited and built on their advantage after the break as Cadden – who along with fellow wing-back Josh Doig proved effective at stretching the play – swept in Boyle’s cutback after a well-constructed move.

By this point United were a man down as Mulgrew was forced off after head coach Thomas Courts had used up his three substitutions, but they did give it everything to try to rescue the game.

And it was a piece of individual brilliance from Glass, one of those substitutions, which gave them a glimmer of hope as the clocked ticked to 90 minutes.

The midfielder weaved past four Hibs players in a demonstration of fantastic poise and balance, before firing a fine left-footed shot into the top corner.

But with the clock and numerical disadvantage counting against the home side, Hibs instead sealed the win through Murphy as he cut in off the left wing and curled into the far corner after his intercepted pass fell back at his feet.

Man of the match – Chris Cadden

You can already see some subtle changes to Hibs’ play under Maloney. Wing-backs Doig and Cadden played high and wide and the back three spread across the pitch to cover the field as they built up from the back.

The width of the wing-backs gave Boyle and Drey Wright the license to run inside the space between United’s wing-backs and outside centre-backs, to devastating effect for the opening two goals. Wright got in down the left to cross for the opener, and Boyle snuck in on the other side to set up the second.

It’s very early days but they looked fluid and confident, although they did fade late on as United responded.

Courts’ side, on the other hand, are in a spot of bother. After making a brilliant start to the campaign, they have lost five in a row and have one win in 10. Up front they just do not have enough, and only St Johnstone have scored fewer in the league.

Having reportedly secured the services of the league’s top scorer Tony Watt on a pre-contract deal, the club’s board may be looking to offer Motherwell enough cash to get him in in January to address their attacking troubles.

Dundee United head coach Thomas Courts: “Our young players are getting valuable experience but in the first half we struggled to get close to Hibs. The boys took on the information for the second half and we got on the front foot.

“We managed a few nice passages of play but the game plan at the moment is to stay in games and it doesn’t help when you fall behind to a dubious opener.”

Hibernian head coach Shaun Maloney: “I think our defensive players were exceptional. I was really impressed with the first half, to have that amount of possession and shots, and the way we played. It was just a shame there were no supporters here.”

The Scottish Premiership goes into hibernation, with Hibs one of the first sides back in action away to Celtic on 17 January (19:45 GMT). Dundee United are at home to St Mirren 24 hours later.