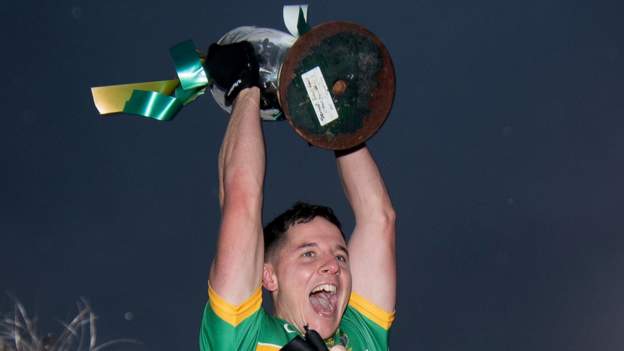 Clann Eireann and Creggan clinched emotional and overdue county senior football triumphs in the Armagh and Antrim deciders on Sunday.

Lurgan club Clann Eireann won their first title since 1963 as late goals by Ruairi McDonald and Jack Conlon saw them stun Crossmaglen 2-12 to 0-16.

But while Creggan were always in control at Corrigan Park, the Armagh decider at the Athletic Ground was a dramatic contest as Clann Eireann fought back from six points down with 15 minutes to go to deny Crossmaglen a 22nd title in 26 years.

Clann Eireann’s victory saw them again win the Gerry Fagan Cup named after their own club-man who played on the club’s last team to win the title 58 years ago.

The unconfined joy of the Clann’s players and supporters in the large attendance in Armagh demonstrated what this victory means to the club.

But for much of the contest, it looked as though it was going to be a day of disappointment for the Lurgan outfit.

That score steadied Clann Eireann and by the 25th minute, three more Turbitt scores helped Clann Eireann move 0-5 to 0-4 ahead before a Rian O’Neill score levelled proceedings by the break.

Clann Eireann’s hopes seemed decidedly remote as a Tony Kernan score started a sequence of six straight Crossmaglen points in the 11 minutes after the resumption.

But as he had done in the first half, Turbitt got Clann Eireann scoring again just before the water break and three further points in as many minutes then followed from the Lurgan men with substitute Conlon and Niall Henderson on target following another Turbitt score.

James Morgan’s response for Cross saw them move three up and while Ruairi McDonald’s 50th-minute goal suddenly brought the sides level, the Rangers outfired appeared to have regained control as points by the O’Neill brothers Rian and Oisin moved them two up with two minutes left.

However, then came the game’s crucial moment as Cross keeper McConville misjudged Conlon’s curving long ball as it bounced over him and clipped the inside of the right-hand post before nestling in the net.

O’Neill appeared to have ensured extra-time as he pointed a long-range free in the final seconds of normal time but Clann Eireann were not to be denied as a sensational Turbitt score restored their lead before his further free – his eighth – closed out their victory.

After final heartache against Cargin in 2018 and 2020, Creggan’s triumph denied Aghagallon a first Antrim title.

Creggan lost two of the three previous deciders to Cargin but after finally defeating their neighbours in the semi-final they came into this one as favourites against a St Mary’s outfit playing in their first Antrim final.

The perennial nearly men of the Antrim Senior Championship asserted their authority early with Matthew Rogers scoring twice before Kevin Small, Ruari McCann and Jamie McCann all fired over to help lead lead 0-5 to 0-1 at the first water break with goalkeeper Luke Mulholland hitting Aghagallon’s score.

Creggan extended their lead to 0-7 to 0-2 by half-time and remained in full control in their third quarter as a couple of colossal scores from Marty Johnston and Kevin Small helped them lead 0-10 to 0-4 by the second water break.

Scores were at a premium for Aghagallon with Creggan pressing relentlessly and forcing their opponents to shoot from distance.

Adam Loughran eventually got St. Mary’s only score from play in the game on 50 minutes when he fired over after Eunan McAteer had struck for Creggan at the other end.

A further two frees from Gareth Magee cut the lead to four points at 0-11 to 0-7 but as Aghagallon frantically chased the game in injury-time, goalkeeper Mulholland’s decision to join the midfield action was punished as Creggan substitute Sam Maguire scampered clear to smash the ball emphatically into the empty net to seal his club’s first Antrim title since 1954

Ramor United since their fifth Cavan senior football title and their first since 2016 as they led all the way in Sunday’s replay to clinch a 1-15 to 0-14 success at Kingspan Breffni.

James Brady’s goal gave them a 1-3 to 0-0 lead after only six minutes with three Ado Cole points helping extend them to 1-8 to 0-2.

Gowna, seeking a first title since 2002, rallied to cut the margin to 1-10 to 0-8 by half-time with Robbie Fitzpatrick having hit hit four of their first-half points.

Two Oisin Pierson points after the resumption saw Gowna trim United’s lead to four but his departure because of injury was a blow to the seven-time champions.

Brady’s continuing accuracy helped Ramor stay in control as he finished with a 1-8 tally – which included four points from play – with Gowna’s prospects not helped by Gareth Mannion’s missed goal chance shortly after the second water break. 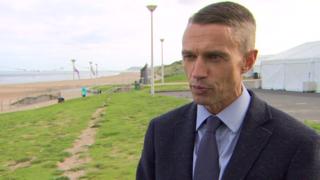 Storm Aiden to bring strong winds and rain to NI