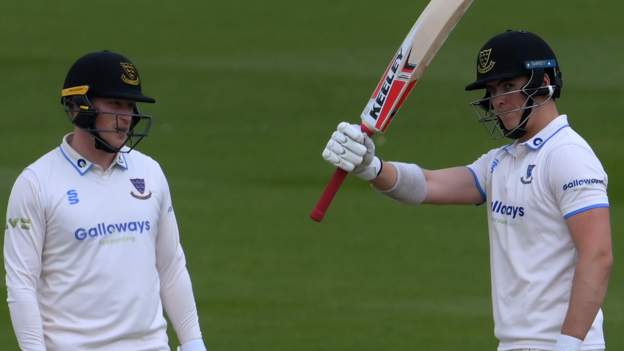 Tom Alsop scored his first Sussex hundred and shared a stand of 204 with Ali Orr, who made 99, as Sussex enjoyed the better of day one against Middlesex in the County Championship match at Hove.

Their second-wicket alliance helped the hosts reach 246-2, but Middlesex then took three wickets in seven overs after tea, including the in-form Cheteshwar Pujara for 16, to leave Sussex 273-5.

Mohammad Rizwan and George Garton counter-attacked impressively against the second new ball and, although Rizwan fell for 31, Sussex reached stumps on 354-6, having won the toss.

Alsop played superbly for the fifth hundred of his career and first since April 2021 as he and Orr responded after Shaheen Shah Afridi had bowled Tom Haines with a beauty which tailed in to knock back the left-hander’s off-stump in the ninth over.

Alsop did not give a chance and reached his hundred with arguably the pick of his 12 boundaries, a straight drive down the ground off Afridi.

He was the more aggressive of the two and seemed in the mood to build a long innings when he frustratingly clipped a ball down the leg side from off-spinner Mark Stoneman to square leg for 113.

It was harder work for Orr, who was dropped on nought and then twice in the same over on 57 and 58. The 21-year-old knuckled down and seemed certain to lodge what would have been only his second first-class hundred when he was drawn into a drive at leg-spinner Luke Hollman and was caught at slip in the last over before tea.

That wicket re-energised the Middlesex attack and they had further cause for celebration when they removed Pujara, who came into the game with an aggregate of 531 runs in his first five innings for Sussex.

The Indian looked in the mood again, driving his first two balls from Hollman to the boundary before slog-sweeping him for six. It was little wonder that he shook his head in frustration after driving loosely to backward point off Ethan Bamber.

Martin Andersson chipped in with the wicket of Tom Clark, who was shaping up well until he dragged the ball onto his off stump and, when Alsop’s four-hour stay ended, Sussex were 273-5 and the new ball was six overs away.

But Garton, playing his first game of the season having recovered from long Covid, and Rizwan ticked along at four an over before Blake Cullen broke through when Rizwan was held head-high at slip by skipper Peter Handscomb playing a forcing shot off the back foot.

Garton was unbeaten on 37 at the close.