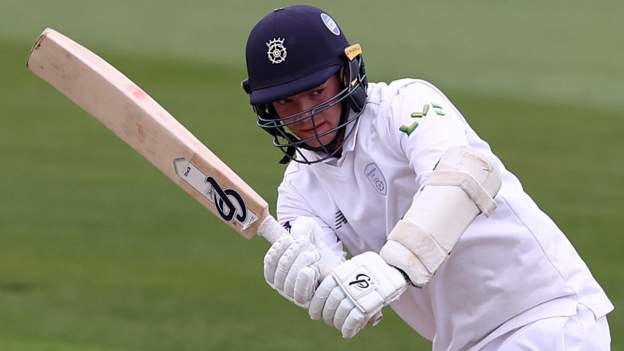 Felix Organ celebrated his promotion to the top of the order with his second career County Championship century as Hampshire enjoyed the better of day one against Gloucestershire.

Organ returned to open for the first time this year and made the most of his elevation with a simple, chanceless 107, while putting on 161 with James Vince – who scored an uncomplicated 78.

Jack of all trades Organ had previously opened in nine first-class matches in the 2019 and 2020 seasons – where he managed a meagre average of 23.

Joe Weatherley and Ian Holland have been Adi Birrell and Vince’s preferred opening pair to leave Organ forging a role as an off-spinner.

Last season his batting topped out at 67, with an average of 21, but his last two matches this season have seen a quick unbeaten 44 to set up a declaration against Kent and a 42 which rescued Hampshire’s first innings versus Lancashire.

Add in 69 for Dorset in a T20 earlier this week and his form can be described as ‘in’.

So, when Weatherley was ruled out of this game with a finger injury, there were no doubts Organ was ready to set the tone as an opener.

He was dropped straight into it when Vince decided to bat on a good-looking wicket, and had further pressure placed on his shoulders when Holland was caught behind by a gentle away swinger from Ryan Higgins in the third over. Nick Gubbins, on the back of twin tons last week, added 61 with Organ before he was given an ankle bruiser by Amir.

Organ, born in Sydney but moved to the UK when young, appeared unfussed and unmovable with a strong defence thwarting Higgins and Amir’s accurate bowling.

He and Vince were able to free their arms more against the change bowlers; both adroitly picking the right moments to defend soundly and attack hard.

The afternoon session was particularly brutal for Gloucestershire, with eight players missing through injury, although their wicketless session was not helped when Vince edged a catchable chance between first and second slip when on 25.

Organ’s century arrived in 212 balls and was accompanied by a long primal scream and a double fist-pump from the middle and an ovation from both his dressing room and the stands.

Gloucestershire pulled the day back in the evening with Vince and Organ’s wickets in quick succession with the old ball – the former pinned by Amir and the latter caught top-edging former Hampshire team-mate Ajeet Dale to deep fine leg – before Ben Brown nicked the new ball behind.

Aneurin Donald made his stirring return to first-team cricket 962 days since his last innings having recovered twice from ACL injuries.

He dabbed his third ball into the leg-side for a warmly received single but chipped to cover three balls later. Barker and Liam Dawson settled things to add a further 37 before the former edged Miles Hammond’s spin behind and James Fuller was bowled to end the day. 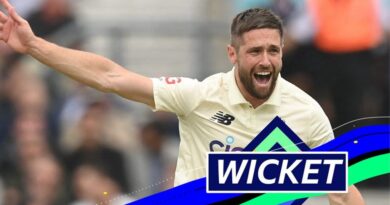