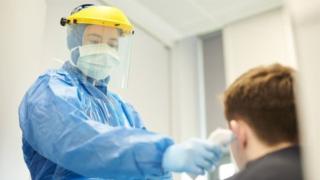 Medical professionals have written to the Scottish government to express “grave concerns” about the protective equipment they have been given.

The letter claims some front line staff are risking their lives in the Covid-19 epidemic because they do not have suitable aprons, masks and eyewear.

The open letter has been signed by more than 100 medical professionals.

The Scottish government said the protection of healthcare workers was its highest priority.

It insisted that there were adequate supplies of personal protective equipment (PPE) in place, alongside new measures to ensure the right equipment reached the right locations “with the highest possible urgency”.

And it said it was clear that appropriate eyewear protection must be provided in accordance with UK-wide guidance.

The government has also set up an email service for frontline professionals to raise concerns about PPE to ensure that any issues are dealt with as swiftly as possible.

The open letter from health workers, which was co-ordinated by Dr Shahzad Hanif and has been obtained by BBC Scotland, acknowledged that “some PPE has now been provided”.

But it said many health care professionals have “grave concerns about the adequacy of what has been given.”

The letter claimed that some health professionals have been issued with thin plastic aprons, surgical masks which have been shown only to be protective against large droplet spread but not to smaller droplets or anything airborne, and flimsy eye cover which does not provide enough protection.

It also highlighted concerns about the adequacy of PPE in palliative care, secondary care and in pharmacies.

It said coronavirus had generated “fear and anxiety” and this has only been compounded by grim reports from Italy and Spain, where a combined total of more than 30,000 people have died.

The medics said that much remains unknown about the new virus, including whether there is airborne spread.

They highlighted the fact that health care workers have already died in the UK, and warned that the risk of becoming infected and passing infection between patients was “simply too great”.

It went on to say: “In past pandemics it has been clearly demonstrated that the fastest, most efficient way of dealing with it is to ensure the safety of the health care workers and not to make them vectors for the disease.

“Not only that but these workers must have confidence in the equipment they are using, and that is simply not the case at present.”

Meanwhile, in a separate open letter to the first minister, care workers have accused the Scottish government of gross negligence for “forcing us to work with insufficient PPE”.

The letter, which was sent by the GMB Scotland union, stated that care workers were leaving their families to help those most in need.

It continued: “We will not let our clients down, but we are being let down by our employers and by government.

“We do not feel safe at work. You have lost our confidence by publishing guidance without consultation with front line workers and by forcing us to work with insufficient PPE.

“By not giving us the PPE we need, and by not testing front line workers, we are being forced to put not only ourselves but our family and our clients at risk.

“Some of our colleagues are sick and some will sadly die due to this gross negligence.”

It concluded: “Front line workers are best placed to judge what we need to keep us safe.

“Listen to us and listen to our trade unions and give us the PPE and testing we need to help save lives.”

The Unison union also raised concerns over PPE after new official guidance for home care staff said they should only wear a mask where the person they were caring for was suspected of having Covid-19 and they were coming within two metres of them.

The union said it wanted home care workers to have “the full PPE they need to do their jobs as safely as possible”, for the protection of carers and those they are looking after.

A Unison spokeswoman added that this part of the guidance – which is different to that in elsewhere in the UK – put home and social care workers in Scotland at greater risk, saying it was “nothing short of a national scandal”.

A Scottish government spokeswoman said the safety of health and social care workers was “paramount”.

Responding to the specific concerns raised about what level of PPE was required for home care staff, she added: “We will continue to engage with Unison and other bodies on this issue and we’ll have an ongoing dialogue with them and other partners to ensure all health and social care workers have equipment available to wear as appropriate”.

“More than six million pieces of PPE have now been delivered to more than 1,000 locations, including care homes”. 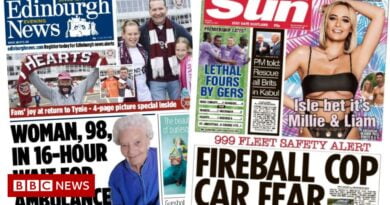 Covid in Scotland: NHS dentistry returns but no 'business as usual' 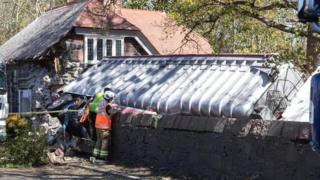 Lorry crashes into house and car in Aberdeenshire