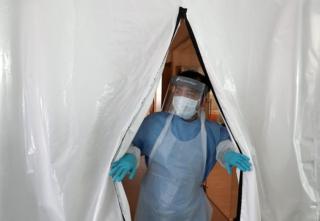 First Minister Nicola Sturgeon has said that a new system allowing coronavirus tests for all essential workers and their families will apply to Scotland.

On Thursday, UK government Health Secretary Matt Hancock said up to 10 million key workers and their households in England could now book a test online if they have symptoms.

Ms Sturgeon said she hoped to have the same for Scotland “very soon”.

But said there were still “one or two” practical issues to be worked out.

Mr Hancock announced the new testing arrangements at Thursday’s Downing Street coronavirus briefing, along with a commitment to recruit 18,000 people to trace contacts of those infected.

Those who can now register for a test include NHS and social care workers, police officers, teachers, those in the justice system, supermarket and food production workers, journalists and transport workers.

Previously, a smaller group of key workers – those whose work is deemed critical to the Covid-19 response – were eligible for testing.

The aim is to allow essential staff to safely return to work.

Mr Hancock said once people enter their details online they will be sent a text or email inviting them to either book an appointment at a drive-through centre or to request a home test kit, though the latter are currently in limited supply.

“There are one or two practical issues we have to make sure we understand here in Scotland so that it fits with our approach to testing and the systems we have in place.

“But certainly our intention is that that will be up and running here too,” she says.

Until now, hospitals have been carrying out tests, along with a network of drive-through centres.

But the drive-through centres have not always been in convenient locations, which may have discouraged people from getting tested.

How many people are being tested in Scotland?

The Scottish government has previously committed to carrying out 3,500 tests a day for Covid-19 by the end of April.

Its latest figures show there were 1,490 tests carried out on Wednesday.

A superlab opened this week in Glasgow which will focus on testing key workers such as NHS and care professionals.

The hope from staff at the Lighthouse Lab is that, as it scales up, they will move beyond key workers into widespread community testing of the general public.

Are you a key worker who is planning to book a coronavirus test on the UK government website? Share your experiences by emailing haveyoursay@bbc.co.uk.

Please include a contact number if you are willing to speak to a BBC journalist. You can also contact us in the following ways: 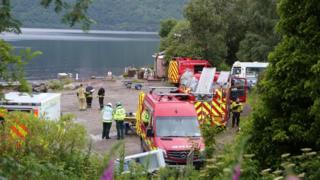