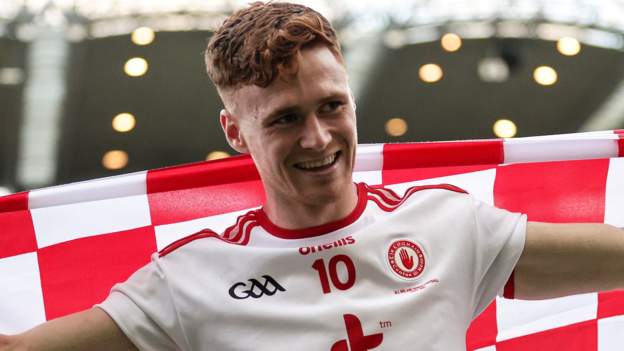 Having joined the senior panel after winning the Under-21 All-Ireland title in 2015, Tyrone’s Meyler suffered a recurring hamstring injury caused by the strain he was placing on his body.

Speaking on the GAA Social, the Omagh St Enda’s man revealed how learning to become “authentic and vulnerable” paved the way for his finest season to date.

Having featured prominently for St Mary’s in the Sigerson Cup and in Tyrone’s run to Under-21 All-Ireland glory, Meyler immediately became a starting player in the senior side under Mickey Harte in 2015.

“I still had that chip on my shoulder, wanting to prove everybody wrong, had to out-train everybody and all the rest,” said Meyler.

“I went straight into the starting team for the Championship and that chip on my shoulder was my downfall then, because I kept getting injured in 2016 and 2017.

“In 2016 I had a really low point. I kept pulling my hamstring, coming back too soon, trying to do too much, training every day twice a day. I thought this mindset would keep me going but it just broke me. Completely broke me.

“I remember breaking down crying at Garvaghey, just being like ‘again. This is happening again,’ Michael Harte the physio came out to console me, [I was] just in bits. I remember contacting the GP then and saying ‘I need to talk to somebody’.”

Conversations with professionals opened Meyler’s eyes to the idea that he was devoting too much to football, and the consequences of that stretched beyond his injured hamstring.

His academic aspirations were too being hampered, with his inability to switch off having a negative impact on his social life.

With the help of a coach, Meyler began to realise the benefit of finding enjoyment away from football and taking time to unwind when not engulfed in the rigours of the inter-county game.

The conversations struck a chord, prompting him to embark on a Master’s degree with a PhD now in his sights. Results, too, began to show on the pitch.

“It has been a big thing for me; personal development, growth in the last 12 months even,” he said.

“That authenticity and to be vulnerable, to trust and to talk has been transformative for me this year. Just allowing me to be braver, and more carefree and having more courage when I play.

“I’d be sitting studying video for hours and hours and doing all the extra training, and you built it up to be something nearly bigger than it is. When you strip it all back it’s a game of football.”

It was Meyler’s perfectly placed ball into the square for Cathal McShane that delivered the first goal of Sunday’s All-Ireland final, and placed Tyrone firmly in the driving seat.

“I probably wouldn’t have done that a couple of years ago, and not necessarily because of Mickey. Mickey put so much faith in me and I’m so grateful, but I was too safe,” he reflects.

“Playing it safe all the time, scared to make mistakes because I’d hyped things up so much.”

‘I think the best are intense at times’

Comfortable in his own mindset and approach, Meyler delivered an outstanding individual 2021 campaign that has received widespread recognition.

Now unanimously considered among the main contenders for Footballer of the Year, the Omagh St Enda’s man appreciates the link between his change in approach and the attention he is receiving.

“Boys would still think I’m quite intense. I am, because I’m driven and I want to do well. I think the best are intense at times because it means something. I’ve just come to accept that this is me,” he said.

“I know this year I’ve just been completely authentic. I’m big into sport leadership, psychology and mindset. I’m constantly reading because I enjoy it, and the more I just accept that it’s not everybody’s cup of tea.

“Just understanding myself better has been huge and I’m starting to reap the rewards a bit now and getting a bit of recognition.”

“This year I didn’t speak to the media once because I was like ‘just keep the head down and work away, and the rewards will come after’ so it is nice to get a bit of recognition and people are starting to see the job that you’re doing.”

Portadown: Man stabbed in back outside cafe