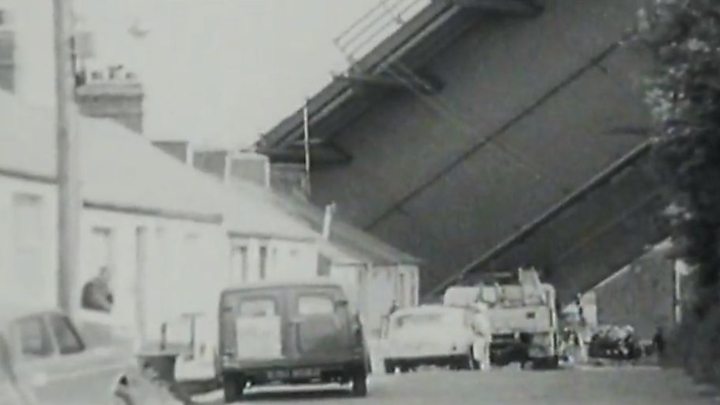 It was meant to be a £2m symbol of a booming economy – but it would prove to have a fatally flawed design that would cause devastation.

On a hot 2 June, 1970, a 150-tonne section of the part-built Cleddau Bridge crashed onto the village below.

Amid the rubble, four workers had been killed and five injured in a disaster that was to change bridge building.

Now there are calls for a stolen memorial plaque to be replaced as part of the 50th anniversary.

PC Phil Lloyd had just begun his shift at Pembroke Dock police station in Pembrokeshire when the fire siren sounded at 14:16 BST.

“I presumed it was just another chimney fire as usual,” he said.

“But when I went into the switchboard the operator told me my mother-in-law was on the phone. She shouted, ‘The bridge has come down!’.

“I told her to stop being so dull but she said there was hell to pay down there.”

His mother-in-law, Ivy Lewis, lived in Pembroke Ferry, on the south side of the river, directly under the bridge which had begun being built across the estuary the previous year.

With the development of local oil refineries, industries and the nearby Milford Haven port, a bridge was needed to cut out a 20-mile round-trip for vehicles.

PC Lloyd and his sergeant were the first to arrive at the village, where they were met with a scene of “utter pandemonium”.

“The whole section of the bridge had come down and was resting at a 45-degree angle in her garden,” said Mr Lloyd.

“Luckily there was a gap between her house and her sister’s house which is where the bridge came down.

“It had completely demolished my auntie’s coal shed and outside toilet but thankfully she had gone to town to have her hair done.

“People were just walking around in a daze while lots more started arriving – it was mayhem.

“One man had been killed at the scene and two others were taken to hospital but died later. Then when the bridge was lifted, we found another man underneath.”

PC Lloyd would spend the next two weeks keeping the site secure as shocked onlookers flocked to view the aftermath.

It was later discovered the diaphragm above the pier of the bridge had not been thick enough and buckled as a 230-foot (70m) box-section was cantilevered out.

Construction was immediate halted, though within 18 months, other box-section bridges collapsed in Australia and Germany with deadly consequences.

An inquiry made a number of safety recommendations, including 500ft (152m) of extra steel to strengthen the Cleddau Bridge, but confidence among the villagers had been crushed.

“Emotions were high and the residents were furious,” said Mr Lloyd.

“They formed an action group, chaired by my father-in-law, and they wanted the bridge moved but you can’t suddenly change the direction of a construction that big.

“My mother-in-law was very shaken up and for some time afterwards she wanted to move house. But eventually things settled down and she lived there until she died.”

A memorial plaque to William Baxendale, George Hamilton, James Thompson and local man Evan Phillips was unveiled on the 25th anniversary of the disaster.

However the steel plaque was reported stolen in August 2017 and has never been recovered.

“I’m disgusted that it was taken and that it has never been replaced. It’s a very simple thing that should be done for the 50th anniversary,” said Mr Lloyd.

Pembroke Dock town council said it was in the process of commissioning a new plaque, having been delayed by the coronavirus pandemic.

When the Cleddau Bridge eventually opened in 1975 it was the largest unsupported span in Europe, though the escalating costs of £12m were even discussed in the House of Commons.

Rules implemented in the wake of the disaster laid the foundations for a new standard in box girder bridge design and the Cleddau collapse was regarded as the last major bridge disaster in the UK.

Now 74, the memory of that day remains vivid for Mr Lloyd.

His son Steve now lives in his mother-in-law’s house, while he built a new property next door – in the shadow of the bridge.

Problems have persisted with objects either thrown or falling off the bridge, including a sandbag that crashed through a roof, and a splattering of colour when the bridge is painted.

But each year, on 2 June, Mr Lloyd offers a moment’s thought to those who died.

He said: “I always look up at the bridge and think, ‘There it is in all its glory – though there wasn’t much glory 50 years ago’.”

Covid apprentices: ‘Mum made me redundant’ 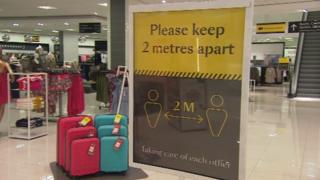 Coronavirus: Retailers ‘need to know when they can reopen’

Coin for Space Oddity singer Bowie heads for the stars