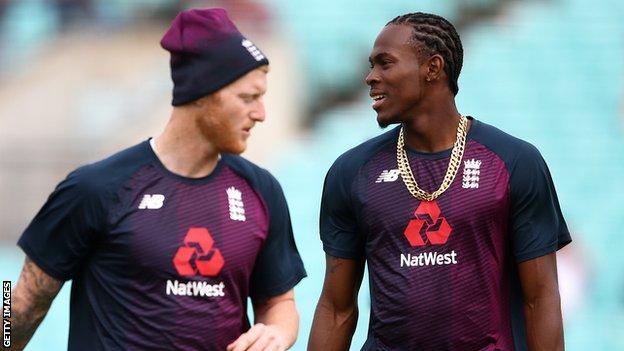 
England coach Chris Silverwood has asked supporters to “understand” the resting of a number of players from Tests this winter.

Ben Stokes, Jofra Archer, Jos Buttler, Sam Curran and Jonny Bairstow have been given time off at points during series in Sri Lanka in India.

All played in the Indian Premier League last autumn.

“We’re resting in the best interests of the players and to get the best out of them long-term,” said Silverwood.

All-rounder Stokes and pace bowler Archer missed the 2-0 series win in Sri Lanka and are returning for the four Tests in India.

Bairstow and Curran are set to miss the first two Tests against India, while Buttler will leave the series after the first Test.

England are keen to manage the workload of their players in a year that will see them play at least 17 Tests and attempt to win the T20 World Cup, most of which are likely to be in the ‘bubble’ of bio-secure conditions.

Last week, national selector Ed Smith explained that all players who take part in all three formats of the game for England are likely to be rested at some point during the winter.

As well as playing in the IPL between September and November, the quintet of England players rested from Tests are set to take part in the next IPL in the spring.

Their participation not only brings financial rewards, but also the opportunity to play with and against some of the best players in the world.

“We’ve decided to rest and rotate; we’ve decided we need to look after the players,” said Silverwood. “I do believe we have to be proactive in looking after them, rather than wait until there’s a problem.

“I’d just ask supporters to understand why we do what we do.”

When asked if he would prefer players to rest during the IPL, rather than when England are playing, Silverwood said: “I’m perfectly happy with the system we’re using at the moment.

“It’s not the world we live in; they can’t be with me all the time.”

Silverwood confirmed that off-spinner Moeen Ali will be available for the first Test against India on 5 February after missing both Tests in Sri Lanka following a positive test for coronavirus.

The former Essex coach added that batsman Ollie Pope, who is still recovering from a dislocated shoulder, could be in contention to play in Chennai.