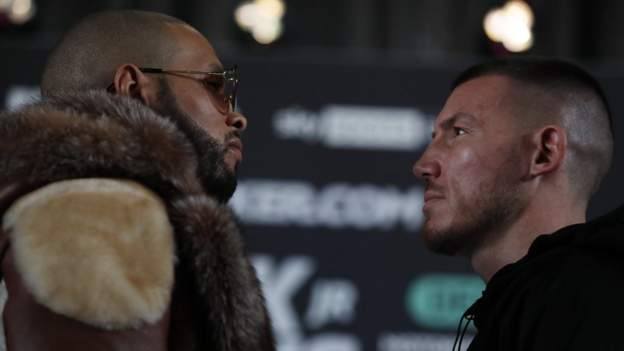 Chris Eubank Jr warned Liam Williams he will “pay for what he said” on social media in their all-British middleweight fight on 11 December.

Welshman Williams takes on Eubank in Cardiff, and the winner could secure a world title fight in 2022.

Eubank fired back at a news conference on Wednesday after harsh words from Williams online.

“Respect is definitely not a word I would use in my feelings towards Liam,” Eubank said.

“He has said a lot of reckless things online and it doesn’t sit well with me at all. This is a grudge match, a genuine domestic rivalry. The things he has said has made it personal.”

After being called a “lowlife” by Williams among other insults, Eubank added: “He is going to get embarrassed in front of his hometown.”

Williams and Eubank continued to trade verbal bows during a fiery news conference, but there were no real fireworks during the first face-off with neither letting their emotions get the better of them.

Eubank has just two defeats on his record compared with Williams’ three, and fans will expect a thrilling bout between two come-forward fighters.

“We all know what his strengths and weaknesses are. Anyone with a good jab and a bit of movement he’ll struggle with,” Williams said of Eubank.

“If you stand in front of him with no head movement, he will punch holes in you. He’s very tough and durable.”

Eubank will have the disadvantage of walking into a hostile crowd in Cardiff with the majority of the audience backing the local fighter.

Williams comes into the fight off the back of defeat by WBO champion Demetrius Andrade in April, while Eubank is on a five-fight winning streak since losing to George Groves in 2018.

The contest will compete directly with Matchroom’s show on the same night in Liverpool, headlined by Conor Benn and Katie Taylor.

But Eubank is confident of a spectacular fight which will end in a knockout.

“You are going to get obliterated,” he said.

“He doesn’t have what it takes to stop what I will do. Either he will quit or get knocked out.”

Coronavirus: Health board says ‘pattern is the same seen in Italy’