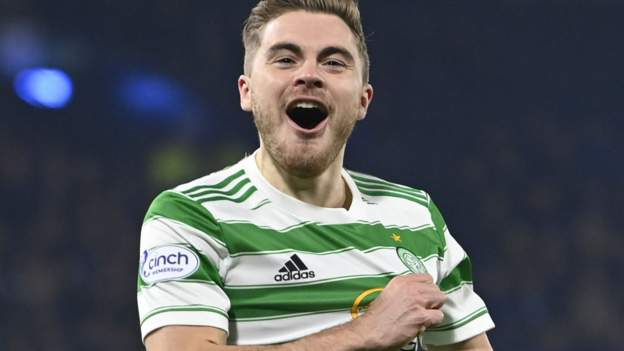 All the talk around Celtic’s scintillating front trio of Jota, Kyogo Furuhashi and Liel Abada has been more than warranted.

After all, they have provided 26 of the 58 goals Ange Postecoglou’s side have scored this term – 44.8% of them to be exact.

But Celtic’s latest goal, their 58th of the season so far, was a vital Scottish League Cup semi-final winner from a forgotten man.

James Forrest was introduced to the Hampden turf with Celtic needing something, anything, to break down a stubborn St Johnstone backline.

The 30-year-old added to a long list of monumental moments in a his 11-year career by drilling in a crucial, decisive opener.

With a showpiece final to come next month, plus crucial European and Premiership fixtures on the horizon, can the Scotland winger be the difference for the rest of the season?

Throughout Forrest’s career, the Celtic academy product has been guilty of flying under the radar.

Not that it should count for anything, but he is a player who keeps himself to himself and is always out of the spotlight, quietly getting on with his business.

But what cannot be downplayed is the numbers Forrest constantly posts up for his side.

There were doubts about his Celtic career back in 2016, but the appointment of Brendan Rodgers revitalised the Scot’s fortunes.

In the 2016-17 ‘Invincibles’ season, Forrest made 21 goal contributions – eight goals and 13 assists – and backed that up with 27, 38 and 38 again in the following three campaigns during which Celtic claimed a historic quadruple treble.

But, in an injury-hit season last term, the Scotland international only made 17 appearances and Saturday’s semi-final was just his 11th game of the current campaign.

Saturday’s semi-final strike was Forrest’s sixth Hampden goal in his last 14 appearances at the national stadium with Celtic.

In all but two of the previous six seasons, Forrest has scored in either a domestic semi-final or final, underlining the winger’s big-game presence.

While Israeli wide man Abada has been a breath of fresh air in the Celtic frontline, along with Kyogo and Jota, the 20-year-old – who occupies Forrest’s position – has scored just once in his last 10 club games.

With a return to full fitness all but there for Forrest, Postecoglou might not have a choice but to field the 30-year-old from the off after a huge moment at Hampden.

We’ve been patient with James and he’s been patient with himself, because he’s had a real disruptive start to the season, but he’s a quality, experienced player and I knew, once he was fit, the way we play would suit him.

I guess it shows our progression a little bit as well that we can throw on a player like James. We really struggled at the start of the year with having depth in those areas, so I’m pleased for him and all the players.