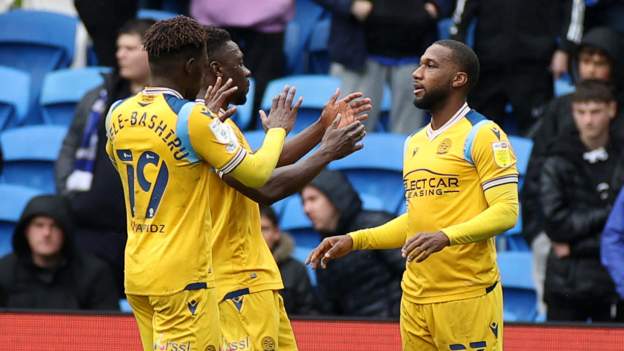 Reading increased the pressure on Cardiff City boss Mick McCarthy with a 1-0 win that consigned the Bluebirds to a fifth successive defeat.

Winger Junior Hoilett, who played 184 games for Cardiff, thumped Reading ahead with their only shot on target.

Cardiff pushed hard for an equaliser but could not find a way past Luke Southwood as Ryan Giles hit the post.

The Royals’ win sees them rise to ninth with Cardiff 20th, just two points above the relegation zone.

McCarthy – who was jeered by his own supporters as the Bluebirds were thrashed by West Bromwich Albion in midweek – made four changes to his side for a game where he was sure to be scrutinised, including a recall for goalkeeper Alex Smithies, while striker Kieffer Moore also returned.

Reading manager Veljko Paunovic made two changes to his team from the defeat at Derby, with skipper Liam Moore recalled and Hoilett lining up against his former club, as did midfielder Danny Drinkwater.

A first half short on incident and intensity from both sides in front of a relatively sparse crowd at the Cardiff City Stadium hardly set pulses racing, but it certainly underlined the fragility of the hosts who conceded from the only shot they faced.

The Bluebirds had a good grip on the game until Curtis Nelson’s poor clearance found Hoilett in space on 38 minutes.

The Canada forward drilled the ball across Smithies with a precise finish that found the bottom corner, although he opted not to celebrate against the club and manager that released him in the summer.

Cardiff might have led by then, but goalkeeper Southwood clawed away Mark McGuinness’ header, while Aden Flint missed a golden chance to equalise, firing over with Southwood beaten when the keeper failed to claim a cross.

The hosts came close just after the interval when Sam Bowen’s shot was blocked, while Giles’ shot from distance forced Southwood to save in a second half that was all Cardiff.

The hosts kept pushing and felt they should have had a penalty in the 65th minute, but Andy Yiadom just beat Kieffer Moore to the ball, before Joe Ralls’ shot was tipped behind by Southwood.

Substitute Rubin Colwill forced Southwood into another save and Marlon Pack curled wide as the Bluebirds threw all they had at Reading, with Colwill curling wide deep into stoppage time.

Ten minutes of added on time only added to the Royals’ nerves as Giles’ cross struck the crossbar with Southwood stranded, but the visitors held on to secure a smash-and-grab win that secured consecutive away league victories against Cardiff for the first time since October 1988.