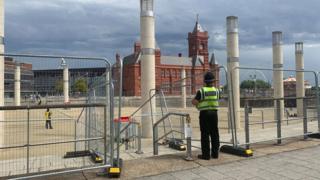 Two people have been arrested and others moved on after weekend crowds gathered at Cardiff Bay.

It followed warnings that antisocial behaviour would not be tolerated as people have been gathering in the area since lockdown restrictions eased.

Meanwhile, people are flocking to hotspots on Saturday, prompting police advice to “think before heading out”.

Dyfed-Powys officers said Storey Arms was busy on Saturday morning and was expected to get busier with people heading to the Brecon Beacons.

And several car parks in Snowdonia became packed before 10:30 BST, with highways officials also saying there was congestion on the A55 in Gwynedd.

In Cardiff Bay, a large number of visitors flocked to the area on Friday evening, despite the council cordoning off the amphitheatre section of Roald Dahl Plass with barriers following incidents over previous weekends.

Police said “dispersal and confiscation powers were used after some 130 people arrived with alcohol, nitrous oxide cannisters and a large music system – some of whom had previously been subject to police warnings in recent weeks”.

One man was arrested for allegedly obstructing a police officer as the sound system was confiscated.

And a woman was arrested for allegedly being drunk and disorderly for a second week, the force said.

Det Ch Insp Lloyd Williams said: “As we’ve seen in recent weeks, it was the actions of a small minority who were intent on ruining it for others.

“Additional measures were in place this weekend, including marshals and barriers, and the vast majority of visitors were respectful of the measures and were supportive of our officers and the efforts being made to keep everyone safe.

“As a result, the atmosphere was largely positive.

“Dispersal powers were used, a small number of disturbances were broken up and, where necessary, alcohol and other items were confiscated.

“Our policing approach will continue throughout the weekend so our message to those intending to visit is clear – please visit, abide by restrictions and enjoy.

“Anyone intent on acting in an antisocial or criminal manner will be dealt with robustly.” 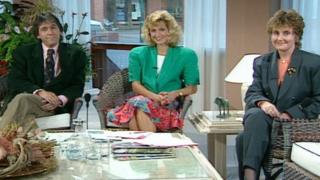