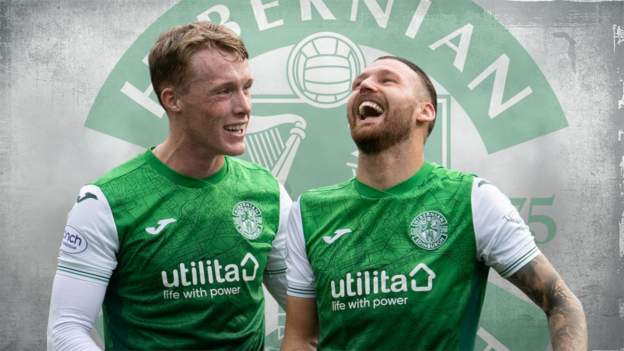 It has been 46 years since Hibernian finished higher than third in the Scottish top flight.

Seven games into the current campaign and they are unbeaten in second place, one point behind Rangers, with the chance to go top of the league with victory at Ibrox on Sunday.

With Celtic’s rebuild under Ange Postecoglou off to a rocky start, and champions Rangers yet to replicate their form of last year, is there an opportunity for Hibs to finish ahead of one, or even both of the Glasgow giants?

Hibs finished third in head coach Jack Ross’ first full season in charge of the club last term, which was comfortably ahead of Aberdeen but still 14 points behind Celtic, who were themselves 25 points off Rangers.

Since the former St Mirren and Sunderland boss replaced Paul Heckingbottom in November 2019 with the club toiling, results have steadily improved.

Thanks to good coaching and a steady squad build, Hibs upped their points-per-game figure from 1.38 in Ross’ first 18 league games (before the 2019/20 was curtailed) to 1.66 last season, rising to 2.14 this campaign so far, albeit after only seven games.

In Martin Boyle and Kevin Nisbet, they have two of the league’s best attackers, with Celtic the only side to score more goals in the league this season, with Postecoglou’s men and Rangers the sole teams to have had more shots.

Defensively, they have managed to keep four clean sheets in their seven league games so far, with Dundee United the only side to beat that with five from eight having played one game more.

Keeping hold of Boyle – the league’s current top scorer – Nisbet, Josh Doig, and Ryan Porteous amid interest in recent transfer windows has kept Hibs strong at both ends of the pitch, while goalkeeper Matt Macey has become a solid presence in goals.

Jake Doyle-Hayes has been a tidy addition, while good coaching has brought the best from fellow midfielders Kyle Magennis and Scott Allan in recent weeks.

Consistency in the dugout and in the squad has helped the Leith club form a solid base.

The question is whether Hibs can now kick on and compete at the league summit beyond Christmas, and not just fade back into the pack.

Key to that is greater resilience, which has often held them back. Ross has fixed an inherited weakness at set pieces, but last term his side were accused of faltering at key moments, mainly in the cups.

They were undone in both knockout competitions by a wily St Johnstone side they were expected to beat, and in the league they sometimes struggled to grind out results when not playing well, only managing to win three games in a row on two occasions.

So far this season, the indications are they are more resilient. Nowhere was that more evident last Sunday when playing St Johnstone, their bogey team who had beaten them four times out of six last term.

There was fortune about their winning goal from the penalty spot, but they found a way to win with a number of players either missing or not at full fitness.

“We’ve not been as good as we were earlier in the season, but we’ve been resilient,” Ross told BBC Scotland after Sunday’s win.

“We’ve been tough and dug out points and reached another [League Cup] semi-final. I think that’s a sign of how much that this team is continuing to grow.”

So are a newly-steeled Hibs ready to overhaul one, or both of the Old Firm? It is an incredibly difficult task.

The average number of points required to finish second in the Premiership since it was rebranded in 2013/14 is 74, which is 11 more than Hibs got last year when they finished third.

That average is across a spell when Rangers were either in the second tier or not functioning at full capacity, and while Celtic were poor by their own standards last term, they still got 77 points.

It would take a huge effort from Ross and his players then, to get enough points to finish in the top two, especially given the top flight is widely regarded as the strongest it has been in years.

Even if Celtic – currently in sixth – or Rangers were both to have below par seasons, there is still unbeaten Hearts to contend with across the city, plus other well-drilled teams throughout the division who can take points from any side.

Then there is the looming question of injuries. Ross revealed Boyle, Magennis, and Nisbet have not been training fully recently in order to get through games, and there are longer-term absentees like Christian Doidge, while Doig picked up a hamstring injury last weekend.

Ross has made Hibs a tactically flexible side, who can switch between a back three and four at will, but for any team to have a run at the top two, they need to keep players off the treatment table.

Hibs will not be expected to do so, but a win at Ibrox – where Rangers have won 21 of their last 22 league games – would be an impressive statement.

“We’ve got a brilliant game to look forward to and massive motivation to go to Ibrox and win to try to go top of the league,” Ross said.