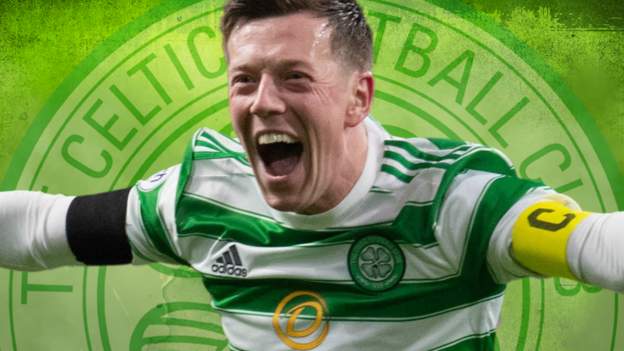 The Scotland midfielder also has 14 major honours to his name and on Sunday could win a 15th – and his first as captain – as Ange Postecoglou’s side prepare to face Hibernian in the Scottish League Cup final.

McGregor’s has been an eight-year journey from the Celtic academy, via orchestrating Notts County’s League One survival alongside a teenage Jack Grealish, to becoming predecessor Scott Brown’s “natural successor”.

“Seeing where Callum is now, it all makes sense,” Shaun Derry, McGregor’s manager at Notts County, tells BBC Scotland. “I knew how much Celtic meant to him. I knew how much he meant to Celtic.

“Now he’s the leader at that incredible, almighty football club. Brown was unbelievable for Celtic, but even though Callum is a different type of player and person, he will also go down with legendary status.”

‘Without Callum, we would’ve gone down’

Before McGregor made the first of his many appearances for Celtic’s first team, he was shipped out on loan to Notts County for an initial six-month stint at the age of 20.

He got off to a fine start in England’s League One, scoring six goals from midfield in his first 13 games, but that form was not mirrored by his team. Manager Chris Kiwomya was sacked in the November and replaced by Derry.

The new boss was immediately made aware of two particular players who had “a different level of technique”. One was McGregor, the other was Manchester City’s £100m summer signing Grealish, who was on loan from Aston Villa.

“I can remember the first training session really clearly,” recalls Derry, who is now first-team coach at Crystal Palace. “What stood out with Callum was his drive. He was always the one that would stay behind and do extra.

“Even at that young age, away from his usual surroundings, he showed a great maturity to handle the situation in Nottingham and he showed that in the way he trained and conducted himself.”

Celtic gave the green light for McGregor to stay for the second half of the campaign, and he went on to finish as top scorer with 14 goals in all competitions and help the club win six of their last nine games to stay in the third tier.

“If Callum wasn’t at the club that season, we wouldn’t be talking about the great escape,” Derry says. “It took him out his comfort zone. But at such a young age, he took responsibility for his career. We were lucky to have him.

“Coming south and fighting in a team who were trying to stay in the league is completely different to the scenarios he’s been involved in since he went back to Celtic. It made him realise what struggle looked like.

“But I had absolutely no doubt in my mind he was going to go back and play for Celtic, it was a foregone conclusion. He’s stood the test of time up there and taken his levels on to play in Europe and win trophies.”

A further 29 first-team appearances followed as Celtic strolled to a fourth consecutive league title under Ronny Delia, then another 34 the next term as the league flag was retained.

Then came Brendan Rodgers. He elevated McGregor’s game – as he did with many others – with the midfielder appearing in a mammoth 101 games across back-to-back treble-winning seasons, contributing to 38 goals.

When Brown decided to call time on his Celtic career last summer, now Leicester City manager Rodgers believed there was only one candidate capable of filling the void.

“It was always going to be difficult to replace Scott,” Rodgers said. “Callum has different qualities and strengths, but he loves the club and knows what it takes to play and be successful for Celtic. He’s the guy to naturally take over.”

‘Choked up’ at Wembley & Scotland rise

Flourishing club form brought international recognition in November 2017, when McGregor made his national team debut in a friendly against the Netherlands under caretaker manager Malky Mackay.

A further 40 Scotland caps have followed, with 10 of those earned under Alex McLeish and assistant James McFadden.

“Callum was always willing to take on instructions,” says Sportscene pundit McFadden. “He never had to be told twice. He’s such an intelligent player and he understands the game brilliantly.

“Even then, you saw his leadership qualities. He wanted to know the roles of those around him so he could make sure they were performing them. He was just such a top professional.” 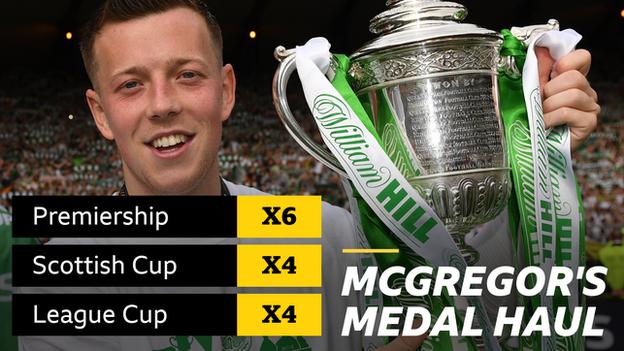 Since current Scotland head coach Steve Clarke’s appointment in May 2019, McGregor has featured in all but one of 31 games, with his midfield relationship with Billy Gilmour and John McGinn crucial in the ongoing six-game winning run.

The trio first started together in the Euro 2020 meeting with England. And, while summer rain doused the Wembley pitch, Derry was hit with a wave of emotion in the stands as McGregor and Grealish shared the pitch in a major finals.

“I’ve got to be honest, I was choked up,” Derry says. “For me, their ex-manager, watching on, it was just an unbelievably proud moment. I’m very proud to have even played just 0.5% of their development.”

“Callum’s technique is underrated,” ex-Scotland forward McFadden adds. “In fact, he’s underrated in general. He’s absorbed the Celtic captaincy and is continually growing into it.

“He’s only getting better as a player as well. Maybe he’s now finally getting the recognition he deserves in a Scotland top. He’s made himself a vital part of Clarke’s team.” 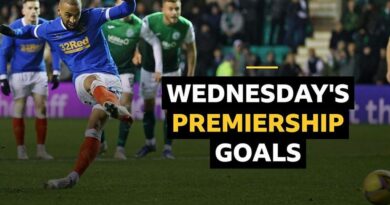 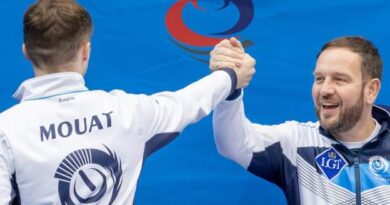 Celtic: Neil Lennon side should be champions if Premiership doesn’t finish