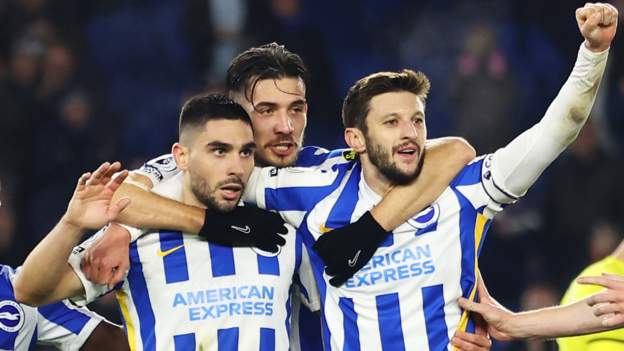 Leandro Trossard’s sublime lob set Brighton on their way to their first Premier League win in 12 games against a below-par Brentford.

Neal Maupay curled in a wonderful second before the break for Graham Potter’s side, who have found goals hard to come by after a promising start to the season slipped away.

The hosts dominated for long periods and moved up to ninth in the table after making light of a winless sequence dating back to 19 September.

Former Bees forward Maupay and Enock Mwepu were both guilty of slashing other good chances wildly wide, while Dan Burn headed against the crossbar for the Seagulls early on.

Alexis Mac Allister also went close to adding to the scoreline against a Brentford team that sporadically threatened but did not click into gear until it was too late.

Aside from early opportunities for Bryan Mbeumo and Shandon Baptiste, the visitors’ best moments were contained to an eight-minute spell in the second half when home goalkeeper Robert Sanchez superbly saved Baptiste’s deflected drive and turned away Ethan Pinnock’s header.

Another goal-bound Pinnock effort was headed to safety by left-back Marc Cucurella, and Brighton deserved the win to complete the double over their opponents, who have dropped to 13th in the table.