The Northern Ireland Protocol agreed between the UK and the EU has proved controversial.

Some have criticised the mechanism for causing trade issues between Great Britain and Northern Ireland.

First Minister Arlene Foster, the Democratic Unionist Party (DUP) leader, has said the protocol is opposed by “all of unionism” and is fundamentally flawed.

However, while some businesses have reported issues with supply chains and exporting, others say the protocol has given them a competitive advantage by granting access to markets in both the EU and Great Britain.

With the new arrangement having been in place for one month so far, those businesses say they want certainty so they can plan their strategies – something, they say, they have not been able to do for the past few years.

Coronavirus: No further deaths linked to coronavirus in NI 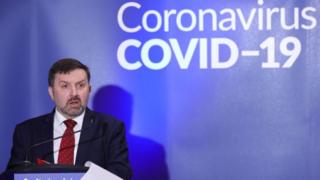 NI 100: Calling the 'midwife' who oversaw birth of new state