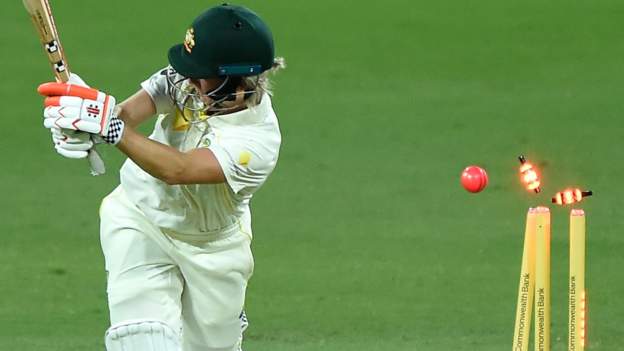 The one-off day-night women’s Test between Australia and India looks destined to be a draw after just seven wickets fell on day three in Carrara.

India declared on 377-8 – the highest score by a visiting team in a women’s Test in Australia – with Deepti Sharma adding 66 to Smriti Mandhana’s 127.

With only 101.5 overs possible in the first two days a draw looks likely.

The four-day Test forms part of a multi-format series and is worth four points to the winner, or two points apiece if drawn.

Australia lead the series 4-2, having won the preceding one-day international series 2-1. Three Twenty20 internationals – each worth two points – follow the Test on 7, 9 and 10 October.

Having resumed on 276-5 India added 82 runs for the loss of two wickets in the first session – Taniya Bhatia caught behind to give Stella Campbell her first Test wicket, and Vastrakar caught by a superb diving catch from Beth Mooney in the gully of Perry.

Campbell struggled on the first day and had to put sawdust on the crease, but Australia men’s bowler Mitchell Starc helped her and her fellow bowlers by buying longer spikes.

India, whose total surpassed the previous record in Australia of 335 made by New Zealand in 1972, batted on for two overs after dinner, adding 16 runs and losing Deepti lbw to Campbell for a Test high score of 66.

India got an early breakthrough when Goswami bowled Beth Mooney for four, as the left hander advanced and looked to flick through the leg-side.

A partnership of 49 between Alyssa Healy and Meg Lanning nullified the tourists, before Goswami returned to have Healy caught behind. The veteran bowler beat Healy first up and then hit her on the shoulder, before the Australia wicketkeeper feathered to Bhatia for 29.

Lanning, who was dropped on 17, was then trapped lbw by Vastrakar after adding 38 – although replays showed an inside edge, but there is no DRS in this series – before Tahlia McGrath, playing just her second Test, slapped a short wide ball by Vastrakar to Mandhana at point.

Perry and Gardner battled hard to put on 24 in 10.2 overs to see Australia through to close, and their first target in the morning will be to reach the follow-on target of 228, which would more or less end any chance of a positive result.

A drawn Test is likely to be lead to more calls for women’s Test matches to mirror the men’s game and last five days, as was the case when England and India drew in Bristol in June.

At the time, England captain Heather Knight said five-day Tests “could be the way forward”.

Listen to ABC Grandstand commentary from day four of the Test match on BBC Radio 5 Live Sports Extra, BBC Sounds and the BBC Sport website and app from 04:30 BST on Sunday, 3 October.