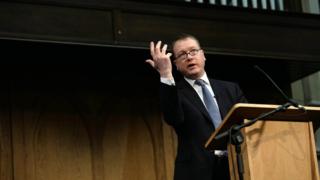 John Larkin is to step down as the attorney general for Northern Ireland at the end of June.

He took up the position in April 2010, after justice responsibilities were devolved to Northern Ireland.

No-one is set to replace him yet, with a number of “interim arrangements” under way.

The first and deputy first ministers say the Executive Office will begin a selection process to appoint Mr Larkin’s successor.

They thanked him for his “tireless and invaluable work” over the past decade.

In January, Mr Larkin was appointed a temporary High Court judge, but said he would not take up the post until his term as Attorney General came to an end.