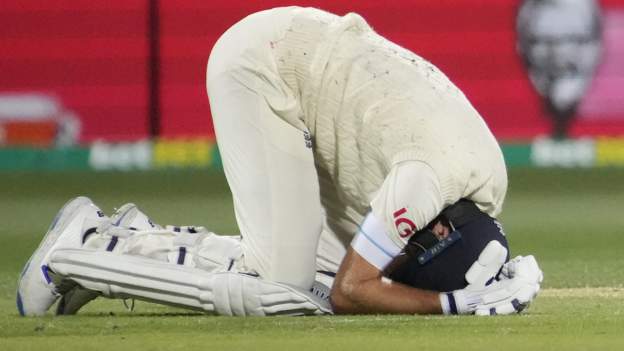 Joe Root is used to carrying England on his back, but in the second Ashes Test the captain put literally everything on the line for his team.

Root’s side were already facing defeat at the beginning of the fourth day in Adelaide, only for the skipper to be struck in the groin, without wearing a box, as he batted in the warm-up.

He went to hospital for a scan and missed more than an hour of the first session, returning to take two wickets with his off-breaks.

Then, late in the day, with England batting to save the match, Root was struck with another eye-watering blow, this time a 90mph delivery from Australia’s Mitchell Starc.

Clearly in agony and struggling to move, Root was dismissed by Starc from the final ball of the day, doing huge damage to England’s slim hopes of escaping with a draw.

To a supreme batsman like Root, that might have hurt even more than the double impact to such a sensitive area.

More misery down under

Root could be forgiven for being sick of spending time in Australia.

On his two previous tours, England have been beaten 5-0 and 4-0, and he remains without a century in 21 innings down under.

Not only that, but during the final Test of the 2017-18 series, Root was admitted to hospital in Sydney suffering from dehydration, diarrhoea and vomiting.

This latest incident was the most bizarre. Taking throw-downs in the nets from England spin-bowling coach Jeetan Patel, Root was not fully padded up. When one nipped back, the captain was left in agony and went to hospital for an inspection.

“You have throw-downs and you often don’t wear much in the way of padding, and you should,” said BBC cricket correspondent Jonathan Agnew.

“It’s still the same hard ball being thrown at you, and it can still catch you all over the body.”

Ben Stokes took over as England captain, with Root ultimately returning to take the wickets of Alex Carey and Starc before Australia declared on 230-9.

England were set a fanciful 468 to win, or more than four sessions to survive to earn a draw.

In the firing line again

When Dawid Malan was lbw to Michael Neser, England were 48-2 and Root arrived at his usual spot of number four.

Joined by Stokes, it looked as if England’s premier batters would remain overnight to battle into the fifth day.

However, in the penultimate over of the day, Root suffered another excruciating injury.

With left-armer Starc bowling round the wicket and angling the ball in to Root’s body, some extra bounce resulted in a direct hit to an already tenderised area.

“For any right-hand batsman, facing the left-armer, knowing the angle will bring the ball back – that is going through your mind,” said Agnew.

As Root writhed in agony, even the Australians knew the severity of the situation.

“We got told to give him some space, so we kept well away,” said Australia batsman Travis Head.

“Starcy on that line is never pretty. With the day that that he had, it wasn’t a great time to get hit.”

Root received treatment and took some painkillers. When he adjusted his protective equipment, he shooed away a TV camera that was hovering overhead, while substitute Craig Overton held up a towel to cover the skipper’s modesty.

Despite being in such discomfort and finding it difficult to move, let alone run between the wickets, Root opted to bat on, rather than retire hurt.

“Once he got hit again he could have easily walked off and a nightwatchman come in, but that’s the character of the man,” said England bowling coach Jon Lewis.

However, given what was to transpire, perhaps Root should have considered allowing himself to be replaced.

“When you’re captain, you want to carry on, and don’t want to be seen to be hobbling off,” said Agnew.

“When the tears clear, he might think that retiring hurt was a better option. At the time, in the heat of battle, he would have wanted to do his bit.”

The most painful blow

Perhaps with some trepidation at the back of his mind, Root’s footwork was not as crisp as it could have been, and he gave an edge to wicketkeeper Carey.

It left England four wickets down, with their best batter out, and staring at a second defeat of the series.

“It’s no real surprise he edged one behind,” said Agnew. “He was clearly in pain and couldn’t run properly. It was a gutsy effort, but it means it’s a mopping-up operation for Australia tomorrow.”

Root hobbled off, battered, bruised and dismissed, with his team scrambling to avoid another Ashes drubbing.

“As captain of England, he wanted to get out there and show people what he could do,” said Lewis. “He felt he was fit enough to bat, to show people what a great player and brilliant leader he is.

“He showed a hell of a lot of character to get out there and fight, because I know he was really sore.”

When asked for an update on Root’s condition, Lewis said: “I’m pretty sure the doctors and Joe are the only people that can tell you that. I’ve not been inspecting it myself.” 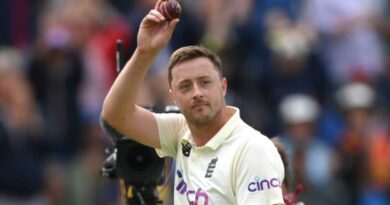