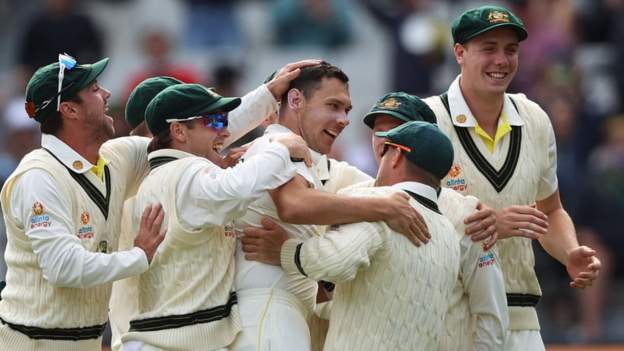 England are facing Ashes defeat after a dramatic second day of the third Test in Melbourne, which saw England close on 31-4 – still 51 runs behind Australia – following inspired bowling from Mitchell Starc and Scott Boland.

England’s bowlers had earlier fought back admirably, reducing Australia to a lead of just 82 with James Anderson taking 4-33.

But in a hostile final hour on a difficult pitch, Starc removed Zak Crawley and Dawid Malan in consecutive balls to leave England reeling at 7-2.

Haseeb Hameed battled to overcome the opening burst from Starc and Cummins, only to edge behind off debutant Boland before nightwatchman Jack Leach was bowled shouldering arms two balls later.

While another top order failure will take up much of the conversation, this was more a reflection of phenomenal, at times unplayable, Australian bowling.

Earlier, the day started almost as dramatically as it ended as the England players were forced to wait before travelling to the ground because of positive Covid-19 tests in their travelling party.

Both sets of teams will do PCR tests before the start of the third day’s play.

England’s batting has come under scrutiny in every innings of the series so far.

But while their first-innings 185 all out was woeful and consisted of numerous batters gifting their wickets away, Monday’s late collapse was very different.

From ball one, Starc and Cummins were a gladiatorial presence – the MCG their coliseum.

They had the ball swinging, bouncing and seaming all over the vast arena and the inexperienced Hameed and newly-recalled Crawley stood little chance opening the batting.

It was ruthless, hostile and often uncomfortable, but compelling, viewing in front of a raucous Melbourne crowd.

Cummins was unlucky to go wicketless but alongside Starc he built the pressure perfectly to allow the latter to have Crawley caught behind before pinning the ever-reliable Malan lbw with the most marginal of lbws just one ball later.

Hameed somehow survived the outburst. He was ducking and dodging all around the crease, but he was hanging on.

Boland had other ideas, however. Inspired by Starc and Cummins, he found the exact same nagging line and seam movement as Hameed edged behind before Jack Leach looked utterly baffled as he lost his off stump trying to leave the ball on length.

Root and Stokes have the unenviable task of saving the Test, series and urn when play resumes at 23:30 GMT on Monday.

Where would England be without James Anderson?

Australia’s seamers may have stolen the headlines but it remains a question not many England fans – or Joe Root, for that matter – like to think about.

Their saviour on so many occasions, he produced another masterclass of swing and seam at the MCG to give England a fighting chance before the batting capitulation.

Such is Anderson’s genius that he managed to extract swing and seam movement even with the ball at nearly 70 overs old.

The wickets of David Warner and Steve Smith would normally be the most crucial in Anderson’s tally, but this time it was under-pressure opener Marcus Harris who provided England with stubborn resistance.

Anderson bowled a phenomenal pre-lunch spell of six overs, five maidens with one wicket for just a single run.

Root held his star man back after the lunch break and it proved to be a masterstroke as Anderson, when he did return, plugged away at Harris’ off stump, eventually enticing a loose drive that the captain himself gratefully accepted at slip.

The beaming smiles on the faces of captain and bowler as they hugged in celebration said it all.

After Adelaide, Root said he wanted his bowlers to be braver with their lengths. Anderson did just that, pitching the ball noticeably fuller and enticing false shots with regularity.

The fact he did not end up with another five-wicket haul is remarkable.

England to play 'one-off Test' against India this year – BCCI 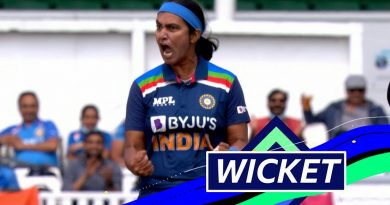