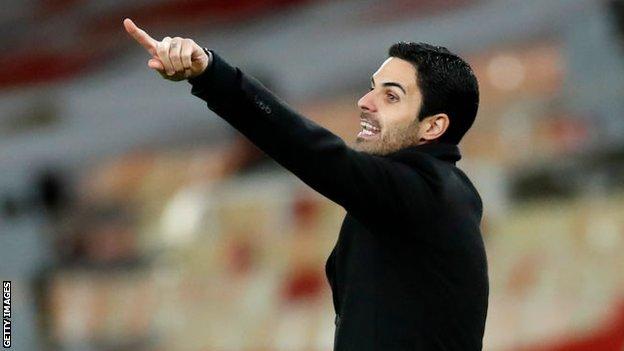 
Arsenal manager Mikel Arteta says he feels “responsible” for the “suffering” endured by those associated with the club during a torrid run of form.

The victory followed their worst start after 14 league games since 1974-75.

“It is draining, it is frustrating and it is painful,” said Arteta, whose team sit in 15th place in the Premier League before Tuesday’s match at Brighton.

“Obviously results-wise in the last few weeks we have all been suffering, I have been suffering. I feel very responsible for that.

“The worst feeling is because I want to do so well for this football club and at the moment we are in, I want to bring all my passion, the knowledge that I have, the right intentions to move as quickly as we possibly can as a football club.

“In order to do that we need to win football matches, to be stable and win. When I don’t, I feel like I am letting the club down and the people that work for us, and obviously our fans.”

After a run of five league defeats and two draws, the 3-1 win over London rivals Chelsea eased pressure on Arteta.

The likes of Manchester City manager Pep Guardiola said Arsenal would make a “big mistake” if they chose to sack Arteta due to the run of bad form, adding it was a “question of time and he will do well”.

Arteta, 38, won the FA Cup in his first season in charge at Arsenal and said he continues to question his methods each day in a bid to identify ways to improve.

During a testing run of form that saw his side lose to Aston Villa, Tottenham, Burnley, Everton and Wolverhampton Wanderers he says he found comfort in family life.

Asked whether he found being in the dugout more tiring than playing the game, Arteta replied: “The simple answer is managing.