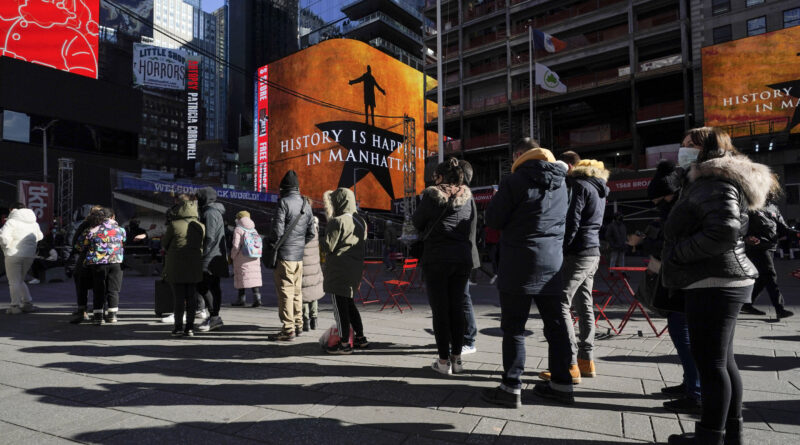 Just a couple of weeks ago, New York City seemed like a relative bright spot in the U.S. coronavirus struggle. Now it’s a hot spot, confronting a dizzying spike in cases, scramble for testing, quandary over a major event and exhausting sense of déjà vu.

An omicron-variant-fueled wave of cases is washing over the nation’s most populous city, which served as a nightmarish test case for the country early in the pandemic. While health officials say there are important reasons why it’s not spring 2020 all over again, some Broadway shows have abruptly canceled performances, an indoor face mask mandate is back and testing is hard to come by.

“It’s disappointing that we haven’t developed a better system for this and that we weren’t better prepared for there to be another wave,” Jordan Thomas said Monday in her fourth hour of waiting for a test at a city-run health clinic near downtown Brooklyn.

With temperatures hovering near freezing, Nina Clark joined the line for the third time since her symptoms started Thursday. Once again, she ended up walking away.

As officials and health experts urged people to get not only tests but vaccine booster shots, an hourlong line for either one formed at a privately run pharmacy in lower Manhattan.

“I’m just trying to remain optimistic,” Inga Chen said as she waited for a booster.

After shuttering some testing centers last month for lack of demand and in favor of pop-up testing vans, the city is racing to expand capacity again. The 130,000 daily tests at city-sponsored sites is already double what the number was just three weeks ago, and Mayor Bill de Blasio said Monday that the city would add 20 fixed locations and three vans this week. It also plans to distribute 500,000 at-home test kits.

Katz said the city would now ensure it had people ready to fill in and take other steps to ease the testing crunch.

The U.S. is contending with both the rise of omicron and a monthslong surge fueled by the virus’ delta variant, and many other parts of the country have considerably higher infection rates than New York City did over the last week. But the speed of the onslaught here is rattling health experts, even after nearly two years of viral surprises.

Nearly 42,600 people citywide tested positive from Wednesday through Saturday—compared to fewer than 35,800 in the entire month of November. The city has never had so many people test positive in such a short period of time since testing became widely available; there’s no clear picture of how many people got the virus during New York City’s first surge in spring 2020.

Hospitalizations also have been increasing, though much more slowly. New admissions citywide were averaging around 110 per day through the middle of last week, roughly double the number a month earlier. But the average at this time last year was around 230, and it topped 1,600 in early April 2020.

The average number of deaths per day neared 800 then and 100 in late January of this year. It’s fairly steady, at around a dozen, as of mid-last-week.

For example, Northwell Health, the state’s largest private healthcare system, had about 400 COVID-19-positive patients as of Friday in its nearly two dozen hospitals in and around New York City, said Dr. John D’Angelo, its chief of integrated operations. The number was up from around 300 a few weeks ago, but a fraction of the 1,350 at one point last January and the 3,500 in early spring 2020.

Also, today’s COVID-19 patients, on the whole, don’t need to stay quite as long as in earlier waves, according to Katz and Dr. Fritz François, the chief of hospital operations for the private NYU Langone Health system.

Still, hospitals are bracing for staffing crunches as infections or exposures force staffers to stay home. Katz said the public system’s clinics are shifting to almost all virtual visits so that some nurses and assistants can be shifted to hospitals and testing sites.

“We know how to do this. We are prepared,” he said at a virtual news conference with the Democratic mayor.

In some ways, there’s no comparison to the virus’ terrifying first strike, when no one was vaccinated, mask-wearing was almost unheard of in New York and clinicians were just beginning to learn how to treat COVID-19.

Whatever the differences, there still are some echoes of 2020.

The city is weighing whether it can go ahead with a beloved tradition—this time, the New Year’s Eve celebration in Times Square, instead of the 2020 St. Patrick’s Day Parade. And residents are once again wrestling with decisions about everyday activities that suddenly look risky.

Sheldon Rogers went to his office holiday party earlier this month, thinking it finally seemed safe to celebrate with colleagues at the tech company where he works in customer service.

After a post-party outbreak, he spent nearly three hours waiting for a test Wednesday at a privately run urgent care center in Brooklyn.

“It was a little reminiscent of early pandemic days,” he mused Monday after testing negative.

Citation:
After reprieve, NYC is rattled by a stunning virus spike (2021, December 20)
retrieved 20 December 2021
from https://medicalxpress.com/news/2021-12-reprieve-nyc-rattled-stunning-virus.html 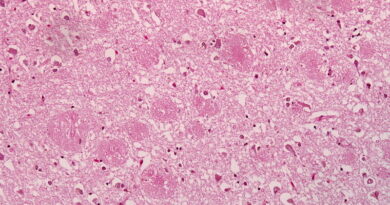